The Airbus A400M military transport plane made its first flight today in Spain. 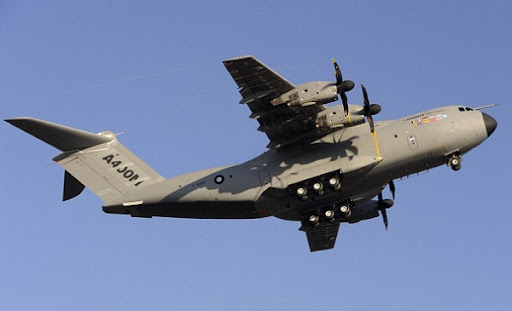 Here's a video clip of the take-off.

The program's not out of the woods yet. Airbus is trying to renegotiate the contract, which was initially to deliver 180 planes to multiple Air Forces for a total cost of about US $32.5 billion. The delays and massive cost overruns have meant that the price may balloon to as much as US $40.6 billion, and Airbus is asking the countries involved in the project to pony up the extra amount. Britain, for one, is very unhappy at the prospect, and South Africa (which had ordered eight aircraft) canceled its order a couple of months ago (although its flag still appeared on the prototype during today's first flight - perhaps Airbus is hoping to change the SA government's mind?).

Regrettably, the Ukraine hasn't had enough money to develop it to production status. Germany was apparently interested in doing so, but got sucked into the Airbus project instead, something it may now be regretting. Both aircraft can carry rather more than the workhorse C-130 Hercules (which carries 20-odd tons), shown below; 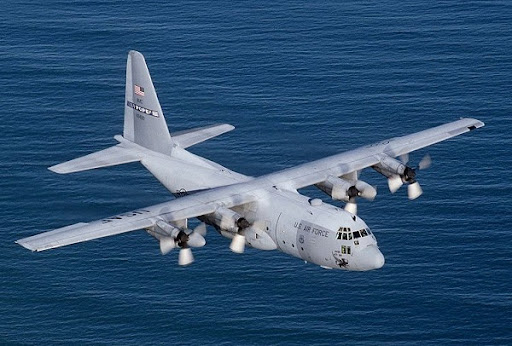 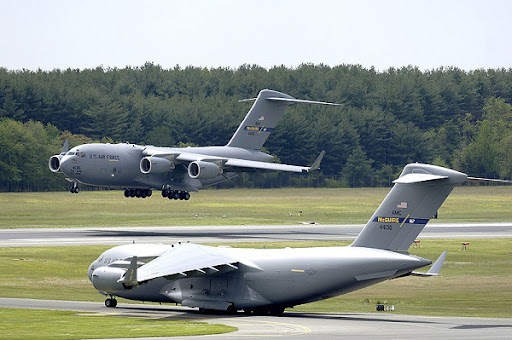 The new Brazilian Embraer KC-390 project is planned to have a payload capacity similar to that of the C-130 Hercules.

South Africa's Denel Aviation is a risk-sharing partner in the KC-390 project, so it's very possible that South Africa will order 12-16 of them to replace its planned eight A400M's and its existing C-130 fleet, which is getting rather old and creaky.

A long-shot 'competitor' may be the Russian Ilyushin Il-76.

It first flew in the 1960's, and has been in production ever since. It's also in the 45-50 ton payload class. A modernized and updated version is being considered, perhaps with Chinese financing involved. If that happens, the updated Il-76 may be a competitor in the A400M's market; but nothing is certain as yet. However, it's a considerably larger aircraft, and probably lacks the rough-field performance of the A400M.

Airbus Military appears to have ambitions to sell the A400M to the US Air Force as well.

The A400M, which achieved first flight this morning, could fill an anticipated airlift gap created by a wave of Lockheed Martin C-5A retirements, Boeing C-17 programme termination and Lockheed C-130J size and performance limitations, O'Keefe told reporters during a breakfast event at the National Press Club in Washington, DC.

EADS anticipates that the A400M would be the USAF's only option to address the gap, which could occur slightly before the middle of the next decade, he said.

The USAF might well find the A400M's payload and range capabilities useful, but I'm not sure that selling it will be an easy task. There'll be immense political pressures to buy more C-130's from Lockheed and C-17's from Boeing, rather than purchase aircraft from outside the country. The current imbroglio over selection of a new in-flight-refueling tanker aircraft for the USAF demonstrates how tricky that sort of political pressure can be.

Still, at least the aircraft's actually flown now, even if three years behind schedule. If Airbus can persuade the national partners involved to renegotiate the contract, and absorb at least some of the additional costs involved, the A400M may yet become a notably successful airlifter.

I'd be shocked to see a sale to the US. The pressure to buy American is enormous in light of the bad economy nationwide and widespread unemployment. Obama is behind in the polls and he'd be blamed personally. The legislators who support it would be crucified at home.

I'm also not sure that it's necessary in the US arsenal. A prop-driven aircraft that carries roughly double that of a C-130 but half that of a C-17? More likely you'd see the US reopen the C-17 assembly line.

The New Zealand airforce consists of about five C-130's, or so I hear. Just as well we're all alone out here eh...

Adding more C-17's to the Air Force inventory would be a much better choice, since it has rough field/short field capability like the C-130 but can carry a much heavier payload. In addition, adding an Airbus cargo aircraft to the inventory would unnecessarily complicate maintenance flows and parts logistics. You'd also have to create a whole new training program for maintainers.

Besides, who'd want to fly in an aircraft made by the French? Not me. I even avoid airlines that use Airbus aircraft.

I agree with DW, better off with more examples of current types than adding another to the mix.

C-130s been around since 1958- Bit of a legacy there that Airbus will have just a 'bit' of trouble overcoming...

The first C-130's flew in 1954 and have been doing fine ever since. Airbus had all kind of proablems getting the A400 off the ground! Bring back the c-141 Starlifter!
Now that was a beautiful aircraft!