It's off to the Maldon Mud Races again!


Today, in a freezing-cold England, the annual Maldon Mud Race was held at the Blackwater River estuary in Maldon, Essex. The Guardian reports:

Passersby are advised to avoid the pungent sludge of the Blackwater estuary in Essex. "Warning - deep mud," reads the sign. But yesterday more people than ever ignored the notice and common sense, by slopping through the ooze in the annual Maldon mud race.

"It's a laugh and it draws a line under Christmas," said Andy Layley, about to take part in his fourth race, in a blond wig. The first mud run started in Maldon in 1973 after a convoluted pub dare. More people joined when the landlord promised a free pint to anyone who could cross the estuary and back. There are no longer free drinks, but the race has become a key fixture in the calendar of eccentric English events and it raises tens of thousands of pounds for charity.

By popular demand this year the number of competitors was raised by 70 to a record 250. "We had to turn away almost as many," said Michael Ballard, secretary of the race, though even he struggled to explain its popularity.

James Bamber, co-author of Wacky Nation, a guide to quirky British events, was one of the 6,000 who turned up to watch the messy spectacle: "The experience is unique. Football matches and theme parks are nothing compared to something like this. It's totally raw and unforgettable."

Many competitors race in fancy dress, soon caked in mud. There were lots of pirates and Santas, and a Zorro and Dennis the Menace.

"I do cold water swimming, worm-charming. Anything that gets me cold and muddy and I'll be there," said Joel Hicks, a trainee barrister from Leicester dressed as a pink panther.

The starting hooter prompted a flurry of flailing arms and legs as runners skidded down the bank. There were low groans of pain as the field plunged into the perishingly cold water. 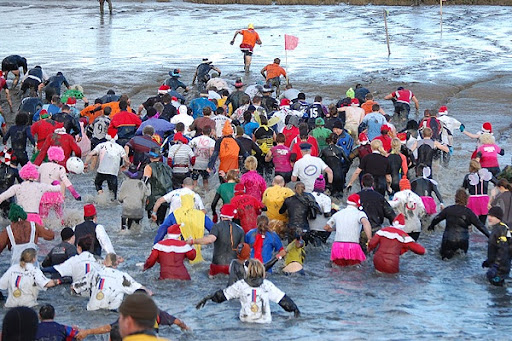 It was chest-high in places and the current alarmingly strong even at low tide. You have to sink your arms deep into the mud to clamber out the other side. Then there's a punishing crawl across the quagmire of the back strait.

It's impossible to stay on your feet. You have to grovel on all fours with your nose just above the stench. It smells like a drain blocked with fish and oil. 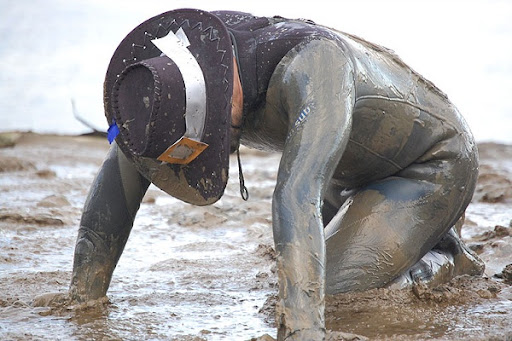 Then it is back into the Blackwater and a lurch up the bank to the finish line. The mud is everywhere: up your nose, in your ears and in your mouth. The cold showers aren't much help: the whole event seems geared to hypothermia.

The winner, Stuart Tutt, a 36-year-old IT manager, was still shaking with cold 10 minutes after finishing. "Never again," was all he could manage to say.

Yep. The English are still mad as hatters sometimes - for which, let us give thanks! It's nice to have a bit of silliness and fun in this all-too-often-depressing world.

Here's a video clip of today's race, taken by a spectator.

I did a mud run on the Marine Corps base Kaneohe Bay in Hawaii one year. It sure was a memorable experience!

Blessed are the cracked--for they let in the light!

Better them than me... Cheers Mates!