The Daily Mail has published a series of photographs taken by the only female Press photographer in England during World War I.

This unique archive of pictures is the work of Christina Broom, Britain's first female Press photographer. 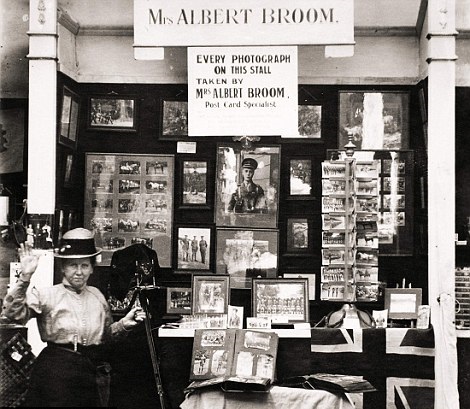 Today, eight albums containing 2,000 prints come up at auction for the first time and are expected to fetch £35,000 at Sotheby's in London.

Self-taught Mrs Broom cashed in on the postcard boom by charging soldiers tuppence for pictures of themselves to send to their families.

Here are young men whose faces brim with swagger, bound together by an intense camaraderie.

Most thought that they would be coming home; this was a war, remember, which the politicians initially promised would be 'over by Christmas'. 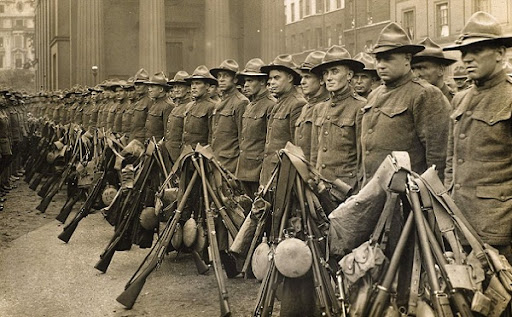 US troops arrive at Wellington Barracks, London, in 1917.

In fact, the majority fell in the mud and the blood of Loos, Ypres, Passchendaele, the Somme, Vimy Ridge or the Marne.

And yet, looking into the eyes of this lost generation, it is clear that these brave souls - boys really, a lot of them - were little different to the lads who are once again making their way to foreign lands to do their duty, in the mud and sand of Afghanistan.

There's more at the link, including many more photographs (plus larger versions of the few I've reproduced here). Highly recommended reading and viewing for military history enthusiasts.

In the second photo, why are the soldiers armed with Krag rifles? I don' know if 1917 date is accurate.

I was gonna say the same thing about the Krags. The side-loading magazine gives them away.

I would wonder if this picture was of a reserve unit that had not yet made the switch to the Springfield 1903. A quick internet search does show the uniforms to be similar to those issued in 1917; the closest uniform from the Spanish-American War appears to be the Rough Riders' uniform, but there are certain differences in the pockets, length of the shirt, and belt.

My vote is that this is a reserve unit that had not yet made the change-over.

I found the photo of John Kipling to be particularly poignant. There was a young man who fought hard for the right to die in a muddy trench.