The National Oceanic and Atmospheric Administration (NOAA) has released news and film of a volcano erupting 4,000-odd feet beneath the Pacific Ocean.

Scientists funded by NOAA and the National Science Foundation recorded the deepest erupting volcano yet discovered, describing high-definition video of the undersea eruption as “spectacular.” Eruption of the West Mata volcano, discovered in May, occurred nearly 4,000 feet below the surface of the Pacific Ocean, in an area bounded by Fiji, Tonga and Samoa. 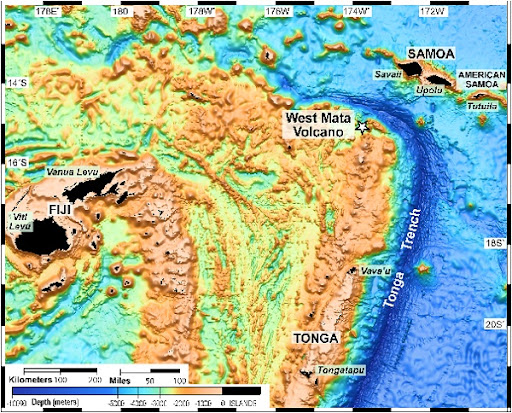 The location of the West Mata volcano.
(Land shown in black is above the surface; the rest is beneath the sea.)

Imagery includes large molten lava bubbles approximately three feet across bursting into cold seawater, glowing red vents explosively ejecting lava into the sea, and the first-observed advance of lava flows across the deep-ocean seafloor. Sounds of the explosive eruption were recorded by a hydrophone and later matched to the video footage. 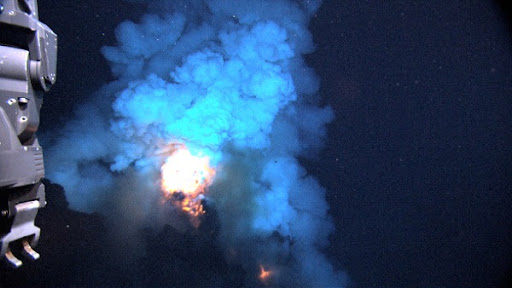 “We found a type of lava never before seen erupting from an active volcano, and for the first time observed molten lava flowing across the deep-ocean seafloor,” said the mission’s Chief Scientist Joseph Resing, a chemical oceanographer at the University of Washington who collaborates with NOAA through the Joint Institute for the Study of the Atmosphere and Ocean. “Though NOAA and partners discovered a much shallower eruption in 2004 in the Mariana Arc, the deeper we get, the closer the eruption is to those that formed most of the oceanic crust.” 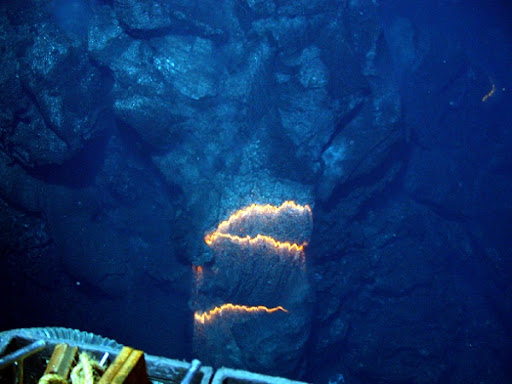 “It was an underwater Fourth of July – a spectacular display of fireworks nearly 4,000 feet deep,” said Co-Chief Scientist Bob Embley, a marine geologist based in the Newport, Ore., office of NOAA’s Pacific Marine Environmental Laboratory. “Since the water pressure at that depth suppresses the violence of the volcano’s explosions, we could get the underwater robot within feet of the active eruption. On land, or even in shallow water, you could never hope to get this close and see such great detail,” he said.

The West Mata volcano is producing Boninite lavas, believed to be among the hottest erupting on Earth in modern times, and a type only seen before on extinct volcanoes older than a million years. University of Hawaii geochemist Ken Rubin believes this active Boninite eruption provides a unique opportunity to study magma formation at volcanoes and how the Earth recycles material where one tectonic plate is subducted under another – a long-term goal of many Earth scientists.

Water from the volcano is very acidic, with some samples collected directly above the eruption measuring somewhere between battery acid and stomach acid. Julie Huber, a microbiologist at the Marine Biological Laboratory, found diverse microbes even in such extreme conditions.

Tim Shank, a biologist at the Woods Hole Oceanographic Institution (WHOI), found shrimp were the only animals thriving in the acidic vent water near the eruption. Shank is analyzing shrimp DNA to determine if they are the same species as those found at eruptive seamounts more than 3,000 miles away. 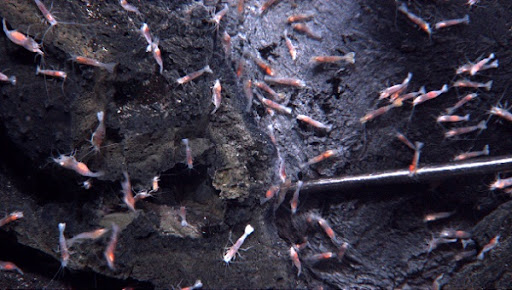 Mission scientists believe 80 percent of eruptive activity on Earth takes place in the ocean, and most volcanoes are in the deep ocean. Until this discovery, NOAA and NSF had sponsored research on submarine volcanoes for 25 years without observing a deep-ocean eruption. Scientists believe further study of active deep-ocean eruptions will provide a better understanding of oceanic cycles of carbon dioxide and sulfur gases, how heat and matter are transferred from the interior of the Earth to its surface, and how life adapts to some of the harshest conditions on Earth.

There's more at the link, including many more photographs, all available in high resolution. Some of them would make great wallpapers for your screen.

Here's a video clip of the volcano in eruption.

This fascinates me. To have a volcano erupting so deep that the water pressure is strong enough to contain the explosions, and allow a remotely-operated vehicle close enough to film them from mere feet away . . . that's amazing!

Could enough of these types of volcanoes cause a warming of the water and actually cause warming between the ocean and air boundary?
As the guy says it took them 25 years to just find these volcanoes. How many more are down there? Maybe even at shallower depths.
Have any of this type of data been fed into the climate programs that the computers are calculating for global warming?
I KNOW, defiantly not!!! So, if they do not have all the data to plug into the program to run the program how accurate are the results they are getting?
Defiantly not VERY ACCURATE at all!!!
And our lives depend on these programs to save us?
Hog Wash!!!!!!