How embarrassing for the railways!


I'm delighted to read that a steam locomotive using 1940's technology is pulling the only passenger coaches running on British railways at the moment - because all the modern locomotives have crapped out due to bad weather!

Passengers stranded when modern-day trains fell victim to the freezing weather have been rescued by the crew of a steam engine.

About 100 passengers climbed aboard the first mainline steam locomotive to be built in Britain for almost half a century at London Victoria when electric trains were delayed.

The 1940s technology used to power Tornado, a £3 million [about US $4.8 million] Peppercorn class A1 Pacific, was able to withstand the snow and ice that brought much of the South East to a standstill on Monday night. 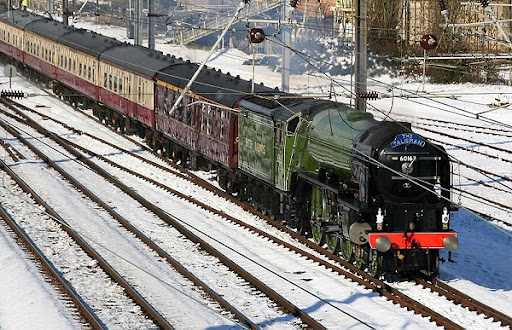 Tornado at work in the snow (image courtesy of Wikipedia)

The locomotive's 'Cathedrals Express' service was offering festive trips in the region when staff on board heard about the stranded passengers.

The travellers were offered free seats and were dropped off at stations as it chuffed through Kent, said Mark Allatt, chairman of the A1 Steam Locomotive Trust, the charity which built Tornado.

Mr Allatt said they were pleased to be able to help some of London's stranded commuters 'get home in style' and joked that rail operators could learn lessons from them.

'It's amusing because this engine is predominantly made up of 1940s' technology and we were able to keep running despite modern trains not being able to,' he said.

'If any of the rail operators would like to use this technology for themselves, we would be more than happy to build them an engine.'

I'm sure the steam-engine enthusiasts who built Tornado, and now operate her, are rubbing their hands in glee to see their modern 'competition' sidelined in the snow!

Too delicious for words. Now the devotees of the steam engine cult have one more reason to rub our collective noses in the proverbial...

I think the name "Talisman" on the engine is the route or train name.

There's a photo on the A1 Steam Locomotive Trust showing the engine with "Cathedrals Express" in the same place.

The number on the engine matches anyway.

When my Granddad returned from "India" (he was stationed at the Kyhber Pass from 1919 until 1931) he went to work maintaining track for what eventually became British Rail.

I am sure that he saw this beauty and many of her companion engines during his long career.

I was in England 1960-61 and 64-68, and we often rode the trains. While I don't remember much about the rolling stock, I wonder if these engines were in regular service at that time?

I'm a little curious as to what downed all the diesels. Still, any excuse to fire up a steamer is a good one.

For Jim -- reflectoscope -- what did 'em in was condensation, and it mostly affected the electrics (most of the UK engines). Get a little fine snow into the ventilation system, melt, and watch the sparks fly. Same thing did in the wonderful PRR GG1s about 50 years ago -- seems a lesson wasn't learned?

As an added plus, all the Greenies must be stroking out as the COAL-FIRED engine chugs away!!