Via Gizmodo, we learn that Amazon.com has made an intriguing announcement.

Yes, this is obviously the result of everyone who got a Kindle for Christmas (lots of folks) firing it up and ordering a bunch of eBooks on a day in which most physical-book readers weren't shopping. But it's still important and impressive. 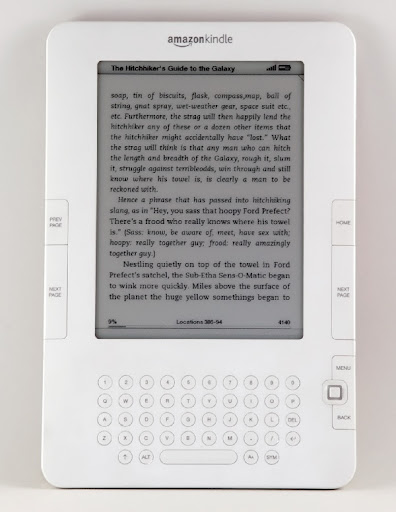 Amazon's strategy is clearly to drive "ubiquity," and based on stats like those above, it is succeeding. The more Kindle books Amazon sells, the more leverage it will have over publishers when it tries to force them to cut wholesale prices. If Amazon's Kindle momentum continues, the day publishers have to capitulate will come sooner rather than later.

And, despite publishers' cries, this is not necessarily bad for publishers: If publishers cut wholesale prices, Amazon will be able to cut retail prices. If the retail prices are cut to nominal levels—$2.99 or $3.99 per copy—sales velocity should soar. Publishers and writers will make less per unit, but the increased volume should make up a lot of the difference.

This is an important milestone for many reasons, but most of all because the publishing industry's business model is clearly unsustainable over the long term. It consumes massive amounts of paper and other resources, costs too much per book to print, store and distribute their product, and shuts out too many authors because publishers feel (probably rightly) that they couldn't sell enough of their book(s) to make a profit, given their existing cost structure. By moving to an electronic format, all these problems could be addressed.

It's so convenient to have one's library in electronic form that more and more people are bound to move to that format over time. As an example, I've just moved house, carrying with me a dozen six-foot-high bookcases and thousands of volumes. I'm going to be moving again sometime in 2010, and as a result of my recent experience I'm planning to drastically cut down on the size of my library - I simply can't face the thought of moving all that weight and bulk again! If I could have most of those books in electronic form, rather than on paper, moving my entire library - and quadrupling its size, for that matter - wouldn't faze me at all. If I could buy those additional books at a reduced price, I'd be spending a great deal of money on them, and the publishers would benefit from that (not to mention that their costs per book would be drastically reduced by cutting out printing, storage and distribution expenses). Everyone would win.

I don't like Amazon's Kindle in its present form (particularly its proprietary format, which binds users to Amazon to buy more books for it). Competing products have their own shortcomings. Now, if someone would bring out an open-source e-reader device, where one could buy books from the retailer of one's choice, and if that e-reader could address the shortcomings of present devices . . . they'd make a mint. I'd be first in line to buy it!

Sony e-Book is probably the closest to what you are looking for. The selection of open source material is growing but still limited (in my interest areas). The other disadvantage is the efficiency of the memory storage in comparison to the Kindle.

There is also the Nook but, I have not really researched that device at all.

There are some worrisome aspects to Kindle's connection to Amazon, but I have a lot of Project Gutenberg books on mine, as well as a lot of converted PDF books.

My Kindle is not indispensible, but I sure do like having it. Hauling my "library" with me on a trip is nice, as is being able to download an interesting new book at the drop of a hat instead of waiting a week for it to arrive in hard copy.

When you can "own" your e-books in the same way you can own your paper books, the e-book concept will finally work for me.

I want to be able to buy a book, and then lend it to a friend (or have a friend lend me his). I want to be able to sell my books at a used book store or the like - though if the prices do continue to fall, that won't be as much of an issue. I want to be assured that I won't have a book taken away from me because lawyers have a spat about who owns what and how much should have been paid and so forth - even if my purchase price is refunded.

And if they could manage to have the Kindle emit the scent of a freshly-printed book... :)

What happen when the battery die?

If the battery dies, you'll have to use a flashlight.


Seriously, you don't lose your books if the battery dies. They're stored on non-volatile memory. You just won't be able to read your books until you charge or replace the battery.

Though, that does bring up a good question: Is the battery user-replaceable? Or does it use some proprietary special battery that you can't obtain anywhere other than the manufacturer?

I have some e-books, almost 100 on my laptop. All are in HTML format from Baen and a few from other sites.

I do not like the Kindle or other "readers." They are bulkier than a PB, and the Kindle will allow the provider to erase a book you've already paid for. That is unacceptable!

I still like books. They're small, light, portable and don't require a power-source or batteries. I don't have to worry about running the battery down and the pages are visible in full daylight contrary to some readers. LCD screens become nearly unreadable in full daylight.

I do have all my e-books backed up on a separate server and that server is backed up as well. I don't know what kind of backup methods, if any, are available with hardcopy readers. An actual book perhaps?