An article describes the sorts of food and festivities that Henry VIII would have enjoyed.

The pacing of a Tudor Christmas was very different to our own.

When Henry wanted to divorce Katharine and marry Anne Boleyn, he broke away from Rome and set up his own Church, but he still kept the Roman Catholic rituals.

The weeks before Christmas were a time of fasting and on Christmas Eve you ate fish, not meat.

Luckily for carnivores, the Tudor definition of fish was elastic: you could eat a gull, because it tasted of its fishy diet.

We have a lot of mistaken ideas about how the Tudors ate. They didn't gnaw chicken greedily and throw bones on the floor, and there were no dogs fighting over scraps under trestle tables.

In a well-conducted house, the dogs - except for little spaniels - were exiled to kennels. Table manners were strict and refined.

Knowing how to cut your bread and what to do with your napkin was an infallible social signal that separated a gentleman from an oik, and every young noble learned to serve at table and to carve.

We're sometimes told that the whole Tudor nation was vitamin deficient and never ate vegetables. But the fact is that because people grew their own, vegetables didn't figure in household accounts.

They were eaten, in season, with enthusiasm - Henry loved artichokes - and intricate layered salads were popular in richer households.

There would be no salads in the depth of winter, though, and potatoes had not yet come to England, but for the Christmas table there would be root vegetables, perhaps roasted with honey in the comforting way we enjoy them today. 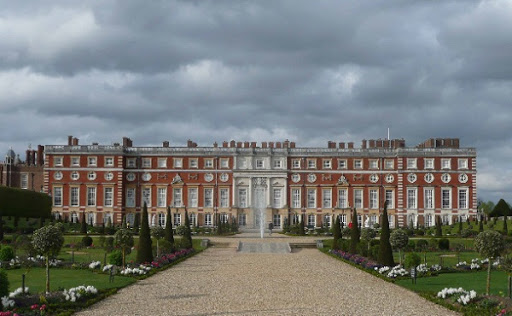 Turkey was introduced to England in the 1520s, but it was not a Christmas food - it was regarded as nutritious for invalids.

Goose was the popular Christmas meat, and the gilded, decorated head and forequarters of a boar were a fine display of a kitchen's skill.

Joints of meat were often cooked in thick pastry cases to keep them moist, and the pastry was then discarded. To get a rich golden sheen on your meat, you could paint it with saffron and melted butter.

The most spectacular centrepiece at a rich man's table was a young peacock, cooked and then re-inserted into its skin and feathers, the glowing tail spread and its neck stretched upright on a wire frame.

The Tudors liked food that looked like fun and this was certainly something they liked to exploit at Christmas time.

You wanted to give your guests a surprise, so only part of what came to table had to be edible.

There are no eye-witnesses to 'four and 20 blackbirds baked in a pie', but a cold pie crust popped at the last minute over live birds would be the kind of joke that Tudor diners liked.

You might very well leave the table tipsy. Drinks were potent and sweet, and included mead, mulled wine and 'lamb's wool' - hot, sweetened and spiced ale, served with apples bobbing in a bowl.

If you were wealthy, your cakes would be decorated with marzipan, and after dinner there would be nuts, thin and delicate wafers, and sweets made with aniseed and ginger to help digestion. 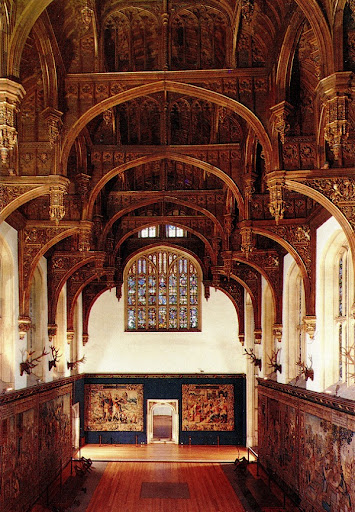 The Great Hall at Hampton Court Palace,
where the King and Court would have celebrated Christmas

Behind the scenes, there was a fully staffed kitchen working at full stretch.

When we talk about roasting meat, we are actually baking it in an oven. Then, meat was spit-roasted.

In a great Tudor kitchen there were two distinct climates: searing heat near the vast hearth and freezing cold elsewhere. At Hampton Court, snowflakes were sometimes seen floating in the air.

Brute strength was needed, so kitchen duties were men's work, though Henry VIII employed a woman who was a maker of 'subtleties'.

These were coloured, gilded figures made of sugar paste: emperors and saints, wild beasts, ships at sea, cathedrals.

This was conspicuous consumption - sugar was expensive. The subtleties were made more for the wonder of looking at them than the pleasure of eating them.