The original 'Rain Man' has died


Kim Peek, who inspired the film 'Rain Man', has died in Salt Lake City, Utah, at the age of 58. The Times reports:

Born in 1951 in Salt Lake city, Mr Peek was diagnosed as severely mentally retarded and his parents were advised to place him in an institution and forget about him. Thirty years later, he was classified as a "mega-savant," a genius in about 15 different subjects, from history and literature and geography to numbers, sports, music and dates. 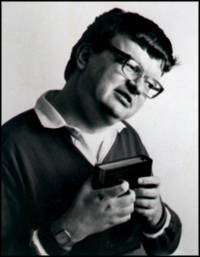 By the time of his death he had committed more than 9,000 books to memory and Nasa made him the subject of MRI-based research, hoping that technology used to study the effects of space travel on the brain would help explain his mental capabilities.

But throughout his life he still needed 24-hour care. Despite his great mental agility, his motor skills remained limited; he could not perform simple tasks such as dressing himself or combing his hair.

His father Fran became his sole carer after Mr Peek's parent divorced in 1975. Fran Peek said that care of his son was a 30-hour-day, 10-day-a-week job but he did it devotedly, encouraging Kim to make the most of his abilities. But Mr Peek remained deeply introverted. It was not until he met Dustin Hoffman, when the Hollywood star was researching his role in Rain Man, that he could look into another person's face. He was 37 at the time.

Dustin Hoffman advised Fran Peek not to hide his son away. Mr Peek said of that meeting: "Dustin Hoffman said to me, you have to promise me one thing about this guy, share him with the world. And pretty soon it got so that nobody was a stranger to him, they were people, and so was he".

He took Hoffman's advice, putting his son on stage in front of thousands of people for whom he answered, almost always correctly, the most obscure questions they could test him with.

He thrived on his new found fame. Mr Morrow said of him: "I love the way he's flowered, it belies the myth that people don't change, especially people with developmental disabilities."

After the film came out, Mr. Peek helped literally millions of people to better understand mental disability, and dispelled many misconceptions. Furthermore, many others with mental disabilities or handicaps took courage from his example, and are today living more normal lives due to his inspiration.

The world is a poorer place for his passing. May he rest in peace.