The last Chinese tiger has been killed


I love the big cats (despite having a very healthy respect for their ability to shred me in a heartbeat - growing up in Africa will give you that, in spades!). I'm therefore very sad to read that the last surviving tiger in China appears to have been killed.

The last wild Indochinese tiger in China was killed and eaten by a man who was yesterday sentenced to 12 years' jail. 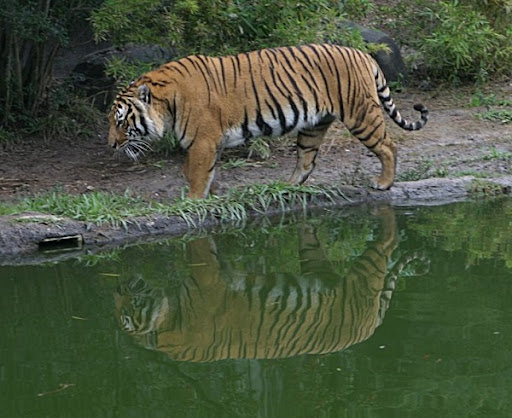 Kang Wannian, a villager from Mengla, Yunnan Province, came across the tiger in February while gathering freshwater clams in a nature reserve near China's border with Laos.

He claimed to have killed it in self-defence.

The only known wild Indochinese tiger in China, photographed in 2007 at the same reserve, has not been seen since Kang's meal, the Yunnan-based newspaper Life News reported earlier this month.

A local court sentenced Kang to 10 years for killing a rare animal plus two years for illegal possession of firearms.

Prosecutors said Kang did not need a gun to gather clams.

Four villagers who helped Kang dismember the tiger and ate its meat were also sentenced from three to four years for 'covering up and concealing criminal gains', the report said.

The Indochinese tiger is on the brink of extinction, with fewer than 1,000 left in the forests of Laos, Vietnam, Cambodia, Thailand and Myanmar.

Tigers, the biggest of the big cats, are also among the most threatened. Their territory is mostly in South-East Asia, which is precisely where the biggest population pressures in the world are being felt. They're being squeezed out of their natural habitat, and because the local populace regard them with fear, they're killed more often than not, despite laws intended to protect them.

It's sad to see the last of China's tigers dead. One hopes the species will be better protected in other parts of Asia . . . but so far, the outlook isn't very hopeful.