I was moved to read the story of Bombardier Robert Key, killed in France in 1944. The Daily Mail reports: 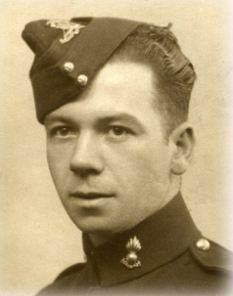 The incident happened on September 5, 1944, the day after Liberation Day in the small town of Annezin, 50 miles south of Calais.

The bombardier, who was on patrol on his own, rushed over and grabbed the grenade from a child who had picked it up and pulled out the pin.

As he cradled the device in his jacket and rushed away, it exploded, killing him instantly.

The military inquiry accused him of 'showing off' after discovering locals had signalled using hand gestures that somebody was playing with the grenade.

But his family have been told by locals that the Army apparently failed to properly translate the accounts of townsfolk.

Mayor Daniel Delomez traced Mrs Mills to invite the family to the naming of a new road in a housing estate built on the field where the bombardier died.

He said he wanted to revive the memory of the soldier to allow local children to understand the 'horror and heroism' of war.

He added: 'He (Key) was a brave hero who saved the lives of several children without thought for his own safety.'

The [Ministry of Defense] would not comment on the initial inquiry and said last night it was unable to change an individual's service record.

But a spokesman added: 'If Mr Key's family write to us asking for a permanent letter to be put in his file, recognising what he did, we can do that.'

The Ministry's comment infuriates me. Who do these bloody bureaucrats think they are? Soldiers have been awarded the Medal of Honor, or the British Victoria Cross, or equivalent medals, for hurling themselves onto hand-grenades to save the lives of their comrades at the cost of their own. It seems to me that Bombardier Key's courage was of a similar order. If he's not eligible for the Victoria Cross, why isn't he being awarded the next-highest medal for valor in action? If anyone earned it, he surely did!

I hope someone in the British government will see to it that justice is done to Bombardier Key's memory. Meanwhile, I invite those of you who share my faith in the Resurrection to pray for his soul, that God may reward his courage in Heaven, even as it was officially disregarded on earth.

"Greater love hath no man than this, that a man lay down his life for his friends" (John 15:13)

One really has to wonder why the Ministry of Defense would be unable to change an individual's service record. That certainly smacks of laziness and incompetence. I'd bet that if the individual in question were discovered to be an enemy sympathizer, or worse, his record would be changed faster than the media could report it! But they are unwilling to honor this man's sacrifice and courage. "Great" Britain indeed! I see that bureaucrats are bureaucrats, no matter where they come from.

Not to take away from Bombardier Key's selfless act saving these children from their folly, it is not an act that would qualify for the level of awards you suggest.

The Victoria Cross is awarded for
"... most conspicuous bravery, or some daring or pre-eminent act of valour or self-sacrifice, or extreme devotion to duty in the presence of the enemy."

Key's actions may have come up for a "Mentioned in Despatches" or even a "Queen's Commendation for Valuable Service" using both the standards of WWII and the present.

Here are a few accounts of what VC awards during WWI were made in respect of:

"On 6 August 1944 near Sourdeval, France, when the enemy had penetrated deeply in the area occupied by his section, Corporal Bates seized a light machine-gun and charged, moving forward through a hail of bullets. Although wounded twice he was undaunted and continued firing until the enemy started to withdraw before him. At this moment he was wounded for a third time mortally. He still went on firing, however, until his strength failed him, but by this time the enemy had withdrawn and the situation had been restored. He died two days later."

"Cheshire was nearing the end of his fourth tour of duty in July 1944, having completed a total of 102 missions, when he was awarded the Victoria Cross. He was the only one of the 32 VC airmen to win the medal for an extended period of sustained courage and outstanding effort, rather than a single act of valour. His citation noted:
In four years of fighting against the bitterest opposition he maintained a standard of outstanding personal achievement, his successful operations being the result of careful planning, brilliant execution and supreme contempt for danger – for example, on one occasion he flew his P-51 Mustang in slow 'figures of eight' above a target obscured by low cloud, to act as a bomb-aiming mark for his squadron. Cheshire displayed the courage and determination of an exceptional leader."

"On 9 April 1945 at Lake Comacchio, Italy, on Operation Roast, Major Lassen was ordered to take a patrol and raid the north shore of the lake, causing as many casualties and as much confusion as possible to give the impression of a major landing. In the face of overwhelming enemy numbers he fulfilled his mission, three positions being wiped out, and when he was mortally wounded he refused to be evacuated so that the withdrawal should not be impeded and his men's lives endangered. Corporal Hunter of the Royal Marines also received his VC in the same operation with his Commando."

"Born on 1 January 1913 in Kiganjo, Kenya, Leakey was the son of Arundel Gray Leakey,[1] a cousin of Louis Leakey. He was 28 years old, and a Sergeant in the 1/6th Bn, King's African Rifles during the Second World War when the following deed took place for which he was awarded the VC.
19 May 1941 (World War II). At Kolito, Abyssinia (now Ethiopia), when the Allied forces had made a bridgehead against the strong Italian opposition, the enemy made a sudden counterattack with both light and medium tanks.
In the face of withering fire, Sergeant Leakey leaped on top of one of the tanks, wrenched open the turret and shot all the crew except the driver, whom he forced to drive the tank to cover. Along with three others, he tried to repeat this with another tank, but just as he opened the turret, he was killed.:

You can read the acts of those VC awards of WWII at http://en.wikipedia.org/wiki/List_of_Second_World_War_Victoria_Cross_recipients

No wonder you've got Brit servicemen openly disrespecting their government, such as the incident last week when wounded Iraq War vets refused to meet with PM Gordon Brown...

...and if anyone was wondering about the resentment expressed in the Kipling poem "Tommy"...that article might help explain it.