Bee landing skills may have implications for aircraft


Discovery News has an interesting article on how bees land - with implications for aircraft and space-ships, it appears.

Whether landing on a picnic table, underneath a flower petal, or on a wall of a hive, bees always manage to touch down without crashing or tumbling.

Now, for the first time, scientists have figured out how these insects maneuver themselves onto all sorts of surfaces, from right side up to upside-down.

The bees' technique, which depends mostly on eyesight, may help engineers design a new generation of automated aircraft that would be undetectable to radar or sonar systems and would make perfectly gentle landings, even in outer space.

"This is something an engineer would not think of while sitting in an armchair and thinking about how to land an aircraft," said Mandyam Srinivasan, a neuroscientist at the Queensland Brain Institute at the University of Queensland and the Australian Research Council's Vision Centre in Brisbane. "This is something we wouldn't have thought of if we hadn't watched bees do their landings." 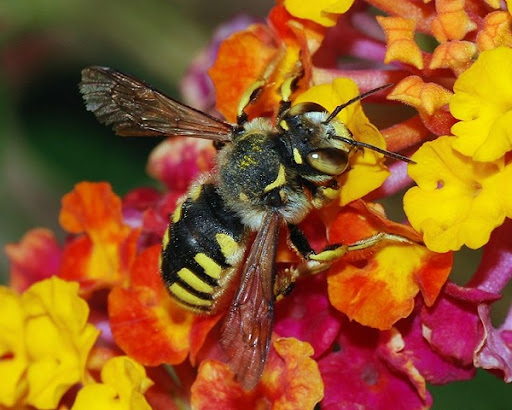 When bees approach an object, according to previous work, they steadily slow down to a stop by adjusting their speed as the size of their target steadily looks larger. Srinivasan wanted to know what happens after that.

Along with colleagues, he set up a platform that could be adjusted to any angle from horizontal to vertical and even upside-down.

Using sugar water, the scientists trained honeybees to fly to the platform again and again. Then, the researchers turned on the high-speed camera.

Their footage showed that no matter how flat or steep the surface, bees slow to a hover at 13 millimeters (about half an inch) away from wherever they're going to land. That suggests, Srinivasan said, that the insects are somehow using their eyes to measure that specific distance.

If their landing surface was flat, the researchers report today in the Journal of Experimental Biology that bees simply touched down back legs first.

If the platform was anywhere between vertical and upside-down, on the other hand, the insects made contact with their antennae first, by pointing them almost perpendicular to the platform. Then, the bees hauled their front legs up and finished with a flip-like maneuver to get their mid-legs and rear legs onto the surface.

It's a graceful and acrobatic motion that would be well suited to aircraft design, Srinivasan said. Current landing systems use radiation-emitting systems, which are detectable and often undesirable for military applications.

Existing technologies, the bee work suggests, may also be more complicated than they need to be.

"It's a beautiful way of landing using biological autopilot," he said of the bees. "We would like to make spacecraft that do smooth, flawless dockings. Whatever bees are doing must be computationally simpler than what we are doing now."

That's pretty amazing, when you think about it. A 'biological autopilot'? Something instinctive, contained in a bee's very DNA, that helps it land correctly, every time, no matter what the shape or orientation of the surface? If the boffins can figure out how that works, it might make human air travel that much safer, given that a very high proportion of aircraft accidents occur during landing. (According to the US National Transportation Safety Board, in 2005, of all general aviation accidents (1,663) for which phase-of-flight data is available, 30.7% - almost a third - occurred during landing [link is to a .PDF file - see p. 35].)

I recently read some of Gibson's work on vision along with some related papers including this 1998 paper on visual navigation among insects. The authors propose that bees use their enhanced ability to sense optic flow to keep the angular velocity of the image of the surface constant as they approach.

Bees process visual flow lines and motion parallax with incredible accuracy partly because the ommatidia (facets) in their eyes allow them sense relative motion with a lot more sensitivity than mammals like us can.

Did you have the video of the owl landing a month or so ago? It was proof positive that nature has solved all the problems we face, we just need to pay attention to how they did it.