I was happily surprised to read about a 17th-century atlas that's coming up for sale in Britain tomorrow.

The beautiful book was prudently purchased in 1949 for £250 [the equivalent at the time of about US $700] - and now the widow of the buyer has decided to sell it. 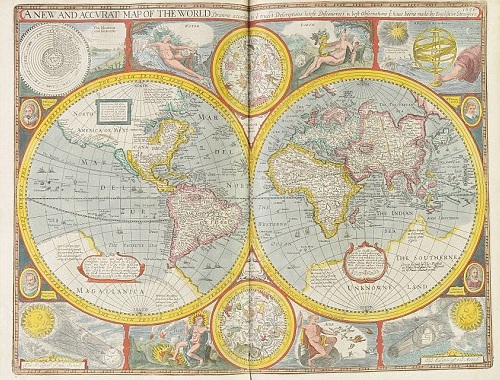 Auctioneers say the sought-after coloured atlas is a "once in a lifetime experience" and they have never sold one for such as large sum before.

The publication records in 96 maps the entire world and is two of cartographer John Speed's published works printed as one.

It begins with the 'Theatre of the Empire of Great Britain, Presenting an Exact Geography of the Kingdom of England, Scotland, Ireland and the Isles adjoyning.'

And attached to it is 'A Prospect of the most Famous Parts of the World... With many Additions never before Extant.'

The two volumes were put together and printed in 1672, some years after the great map-maker's death.

This is the first time they appeared as one and includes eight new maps of Virginia and Maryland, New England, Carolina, Jamaica and Barbados, East India, Russia and Canaan.

These atlases rarely turn up for sale and this is unique because it has been painstakingly hand-coloured - probably in the 18th century. 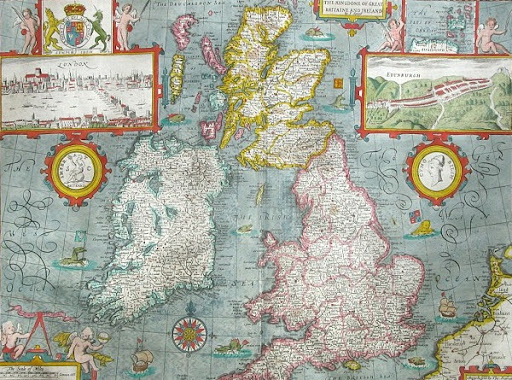 The colours are superbly vivid still and turn black and white outlines into a magnificent work of art.

There's more at the link, including more photographs of maps from the book. I'm astonished that it's still in such good condition. It's not something I'd want to buy for myself, even if I could afford it: but I can appreciate and enjoy its antiquity and artistry without having to own it.