Terrorism and instability - a lethal combination


I'm cynically amused by the alarmed reaction in the news media to the growing danger that terrorist organizations may take advantage of the instability in the Middle East to obtain advanced weapons and pursue their own agendas. I mean . . . what the hell did they expect? That terrorists would wring their hands in guilty shame at the violence on the streets, and spontaneously start praying for the souls of the victims?

The situation in Libya is a good example. The New York Times reports on a significant risk that some of Gaddafi's thousands of man-portable air-defense systems (MANPADS) may end up in terrorist hands.

Five months after the armed uprising erupted in Libya, a new round of portable antiaircraft missiles — weapons that governments fear could be obtained by terrorists and then fired at civilian jetliners — have been slipping from storage bunkers captured by rebels.

In February, in the early stages of the uprising, large numbers of the missiles slipped from the hands of Col. Muammar el-Qaddafi’s government as the rebels established control over eastern Libya and the ammunition depots there. The leakage resumed recently with rebel gains here in the western mountains, which opened up new ammunition stores.

The new leakage of the missiles, which are of the same type that officials in other African nations have said have already been trafficked over Libya’s borders, underscores the organizational weakness of the forces opposed to Colonel Qaddafi; it also raises concerns that if more Qaddafi depots fall to the rebels, then further stocks of the weapons could become accessible to black markets.

Signs of the diversion are readily visible here, at an ammunition depot captured late last month from the Qaddafi forces after repeated NATO bombings.

On a recent day, 43 emptied wooden crates — long, thin and painted in dark green — had been left behind on the sand inside the entrance. The boxes had not been there during a visit to the same spot a few days before, and the weapons were gone.

The stenciled markings showed each crate had contained a pair of lightweight missiles called SA-7s — early Soviet versions of the same class of weapon as the better known American-made Stingers, which were used by Afghan fighters against the Soviets in Afghanistan. It was not clear who had taken them. The rebel guards variously blamed Qaddafi forces and misinformed opposition fighters.

During more than four decades in power, Colonel Qaddafi’s often bellicose government is thought to have acquired as many as 20,000 of these missiles, known as Manpads, for Man-Portable Air-Defense Systems, in arms deals with the former Eastern bloc.

... American officials and Western security analysts say there are grave worries that once the weapons inherited by rebels have been made accessible and reach unsupervised hands, opportunistic smugglers can match them to potential buyers.

In a telephone interview, Andrew J. Shapiro, assistant secretary of state for political-military affairs, described the unsecured missiles in Libya as “one of the things that keep me up at night.”

I expected nothing less. Gaddafi's supplied terrorists with weapons for decades (not least the IRA in Northern Ireland). He stockpiled suitable weapons for the purpose, far more than he or his country could possibly need for their own use. In terms of MANPADS, Libya appears to have had mostly 1970's-vintage SA-7's, but there are an unknown number of much more modern - and much more dangerous - vehicle-mounted SA-24 systems in the mix as well. 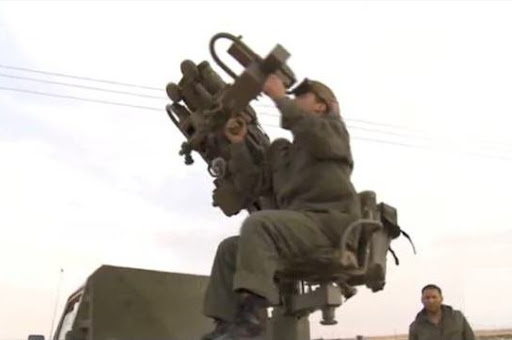 Al Qaeda is active in Somalia and Yemen - nations with long-standing links to Central African smuggling rings through Sudan. It wouldn't surprise me in the least to find Al Qaeda militants and their allies in possession of some of these missiles before long. After all, they want to shoot down unmanned US aircraft such as the Predator and Reaper that have been keeping an eye on them (not to mention killing their leaders with missile strikes!).

The situation in Libya isn't the only threat. Consider Egypt, where the Muslim Brotherhood has long been regarded as a terrorist organization. Since the revolution in that country earlier this year, the pipeline carrying Egyptian natural gas to Israel has been sabotaged four times, most recently this past week. The terrorists responsible used machine guns and explosives. Any bets on where they got them? Disaffected military personnel, or military arsenals guarded too carelessly in the heat of the revolutionary moment? I wouldn't bet against either possibility.

I fear the so-called 'Arab Spring' may yet turn into a terrorist's wet dream - and a nightmare for the West.

Not to defeat geddaffi, but to keep them out of the rebel Muslim hands.