Today's award goes to the Worcestershire County Council in England.

Residents on the quiet square watched in disbelief as workmen dug up 300ft of road and laid fresh Tarmac - but left a neat, rectangular island around one car. 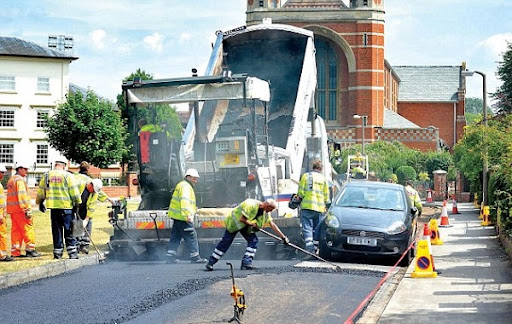 The owner of a Fiat Punto which was left on St George's Square in Worcester had failed to move the car before the scheduled work began.

One resident said: 'It's utter madness. I couldn't believe the workmen started resurfacing the road around the car. When the car is finally moved the road will look ridiculous.'

Worcestershire County Council had told people in the area last week that it would take two days to re-lay the road which was last done 25 years ago.

When workmen showed up to start the job, they discovered one car hadn't been moved. They proceeded to dig up the road, leaving a 10ft by 6ft rectangular island around the car.

Why they couldn't simply tow the damn car before starting to resurface the road is beyond me . . .

Oh, well. Your taxes at work!

I've seen the exact same thing happen in Ireland. The Irish joke about their parking habits. They don't park cars they abandon them anywhere that suits them. And in most they don't get a ticket.

Car towing is virtually non-existant due to the fact that the vehicle might be slightly damaged and that would violate the right's of the car's owner. In the case of auto accidents where a car is disabled and blocking a road they use a "recovery vehicle" and gently hoists the mangled remains onto a flatbed.

Generally an illegal parked car which in many cases is causing traffic chaos is clamped and left till the owner returns and pays a fine.

In the case of the street being tarred the workers tarred around the parked car, as in this article and came back the next day to fill in the space.

There were no police involved, the car wasn't ticketed and the tarring workers didn't raise an eyebrow. Thet just went about their work like nothing had happened.

This happened to me!

The government tore up the asphalt road in front of my house...and left it as dirt for FOUR MONTHS.

One day, without any warning, I came home from doing errands (friends had driven) and found my road repaved...except for the small bit under my truck.

Apparently it didn't occur to a SINGLE FRICKING RETARD in the town government to post fliers or to make phone calls ahead of time.

I was away from home from noon till 2pm, and there was a series of messages on my answering machine from from the town.

No wonder these people don't work in the private sector - they only thing that they're good enough for is to be taken apart and sold as replacement organs.

I ran into the same situation as Toejam describes in several European countries, with differing results from the government. In Russia, cars were parked wherever the driver could find space, regardless of traffic and safety. There were thugs on the streets of Moscow and St. Petersburg who made their living guarding illegally and dangerously parked cars. In Ireland, I was amazed at the tiny spaces used by drivers to park their cars.

In this case, why didn't they just pick up the little Fiat and put it on the sidewalk? It was a Fiat Punty, not a Mercedes. I've driven those cracker boxes, and the ony thing I can say about them is they're so lightly built they get great gas mileage.