Saltwater crocodiles are the largest reptiles in the world, growing up to 20 feet in length (occasionally longer) and weighing up to 1½ tons (occasionally more). Along with the smaller freshwater Nile crocodile in Africa, they're probably the most deadly to humans of all crocodile and alligator species. They were responsible for the worst incident of crocodile-on-human predation in recorded history during the 1945 Battle of Ramree Island, when (according to conflicting accounts) anywhere from a few hundred to almost a thousand Japanese troops were killed and eaten. One contemporary account states:

"That night was the most horrible that any member of the motor launch crews ever experienced. The scattered rifle shots in the pitch black swamp punctured by the screams of wounded men crushed in the jaws of huge reptiles, and the blurred worrying sound of spinning crocodiles made a cacophony of hell that has rarely been duplicated on earth. At dawn the vultures arrived to clean up what the crocodiles had left. … Of about 1,000 Japanese soldiers that entered the swamps of Ramree, only about 20 were found alive."

Be that as it may, my thoughts were turned to saltwater crocodiles by an article in the Daily Mail, describing one of these monster reptiles that took bait from a stick right alongside a boat full of tourists. In the picture below, note the size of the beast in comparison to the human figures, and its missing right foreleg, presumably lost in a fight with another crocodile or a shark. 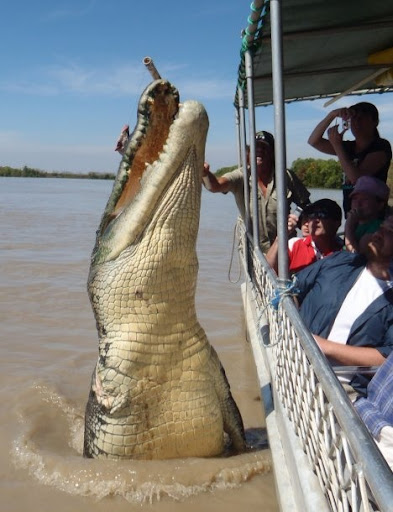 There's more at the link. It's an interesting article.

Looking at the size of that thing (and note that only about a third of its length is out of the water), it's no wonder so many Japanese soldiers never made it off Ramree Island . . .

There's a reason our ancestors survived predators like that. They left them alone.

I'm pretty sure "don't mess with any predator whose head is as large as my entire body" just made the list of behaviours. Living in America, it hadn't ever really come up before. I am, however, capable of learning from the actions of others, as well. :)

I thought the dinosaurs were extinct...

When I lived in Houston, I asked around for what it took to get a permit to trap gators out of the bayous and irrigation ditches south of town.

One of the tidbits I got was, use a whole fryer from the grocer, use a hay hook or meat hook thru the chicken, and the higher off the water you hang it the bigger the gator you'll catch.

But Holy Buckets Batman!!! that is one HUGE beast....

Reminds me of a quote from Col. Cooper's book, "To Ride, Shoot Straight and Speak the Truth":

Mother may I go out to swim,
Yes my darling daughter,
Hang your clothes on a hickory limb,
But don't go near the water.

Some Texan is looking at that photo and thinking about BOOTS!

I now understand why there is a 57mm recoilless rifle...

The nature preserve on Green Island, Queensland has museum on native wild life. I learned the following:
Natives of New Guinea worshiped salties as gods. No weapon they had could kill a croc. When found fresh dead croc heads would be preserved via smoking. Extrapolating from living croc size the old ones were 28 to 32 feet long.

@Jay G: Screw the rifle, you need artillery to kill something this bloody huge!