Following my recent article about the T-6 Texan (a.k.a. Harvard) in South African service, some readers asked about other vintage military aircraft that served there until the 1990's. (Some, such as C-47's, continue to serve to this day in updated form.) I'll be posting a couple of articles about such warbirds over the next few weeks.

The video clip below shows a remarkable display by a C-54 Skymaster of the South African Air Force (SAAF) in 1990. 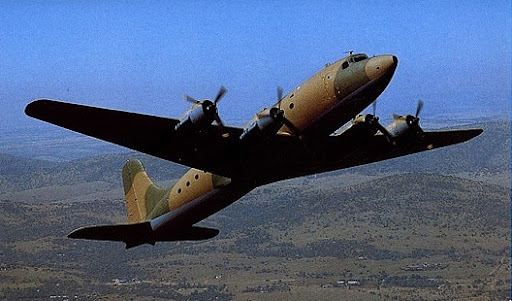 The SAAF obtained a total of eight of these aircraft; four civilian DC-4 models from South African Airways during the 1960's (some of which had been converted to civilian models from military C-54's by Douglas after World War II), and four more C-54's and DC-4's during the 1970's. One was lost to a hangar fire in 1980, but the other seven (including the last DC-4 made by Douglas) served faithfully until they were retired in 1994. They were used for general and VIP transport, and at least two were converted for the ELINT mission, serving very successfully in that capacity during the Border War.

The first aircraft in the clip, seen for only a few seconds, is a Spanish-built CASA 352, a version of the pre-World-War-II Junkers Ju 52 transport.

Ju 52's and Ju 86's were used by South African Airways prior to World War II, and on the outbreak of war all were taken into SAAF service. They thus served against their country of origin. This particular Ju 52/CASA 352 was purchased and restored as part of the South African Airways Historic Flight.

The C-54 display is quite remarkable for a World War II-vintage four-engined heavy transport (well, heavy for its time, anyway!). It includes a low pass with the two starboard engines shut down. The pilot goes on to loop the plane later in the show - something I've never seen done by any other aircraft that large and heavy.

This display took place on the same date as the 50-ship Harvard formation flight in 1990, celebrating the 50th anniversary of that aircraft's service with the SAAF. If you ask me, the C-54 demonstration outshone the mass Harvard fly-past! The pilot certainly demonstrated his absolute mastery of his aircraft.

WOW! That was some piece of airwork- he must have had the rudder trim all the way over with the two engines shut down.
That last maneuver looked like an immelman-a half inside loop followed by a roll to return to normal attitude.
Oshkosh is in a week or so......

Nice, and yeah, he DID know that airplane really well :-)

I was doing some research about the C-54 and came across your site. Loved the video. I was shocked to realize that the Skymaster was capable of such maneuvers. Certainly the pilot's kill is a factor. It was a sight to behold!