The reality behind calls to "Tax The Rich"


I'm sure many readers have seen protest signs held up by left-wing or so-called 'progressive' demonstrators, demanding that the rich pay more taxes to fund social programs like Medicare, etc. Here's one example from the recent budget protests in Minnesota. 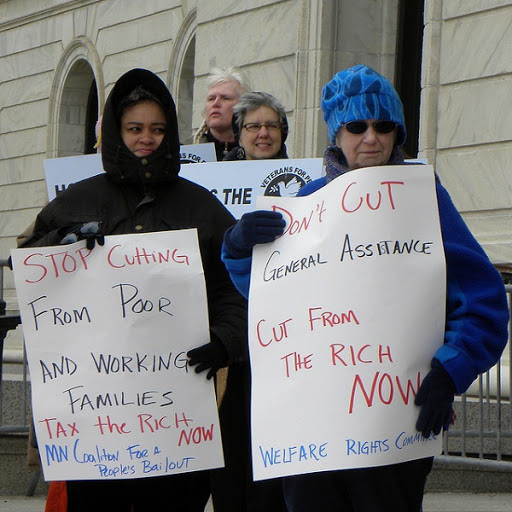 Unfortunately, such calls illustrate only the economic illiteracy of those making them.

The National Taxpayers Union has a series of tables showing the proportion of income taxes paid by those at various income levels over many years. Here are the figures for 2008, as provided by the Internal Revenue Service. 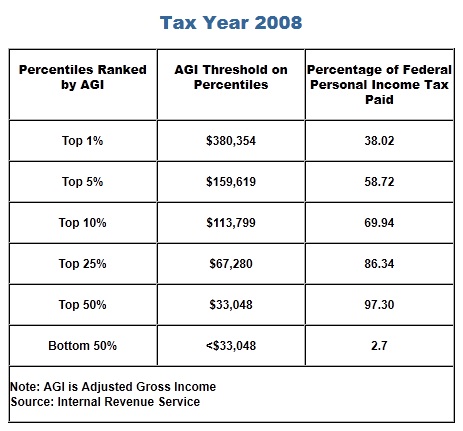 So, the top 25% of taxpayers - those earning more than $67,280 per annum, which isn't all that high - paid 86.34% of all income taxes received by the Treasury in 2008. The top 1% paid almost 40% of all the income taxes in the USA. Tell me again how the rich can be taxed even more than that . . . without driving them either into poverty, or into emigration, taking their money with them?

Anytime you hear someone demanding that we 'tax the rich', or insisting that 'the rich must pay their fair share', show them those numbers, and ask them whether the rich aren't already being soaked for far more than their fair share. If they say they're not, you know you're talking to a hard-core ideologue who's not interested in facts - only the politics of envy.

You want a fairer tax? OK, how about one that causes the bottom 50% of earners to pay something towards their upkeep? How about replacing income tax with a consumption tax - a sales tax, or a value-added tax, or something like that - which taxes every penny spent, rather than every penny earned? It's easy enough to exclude genuine staple items such as bread, milk, etc. from the tax net, so that the poor won't have to pay more for what they truly need for their daily survival. However, luxuries - including soda, candy, cellphones, etc. - would all be taxed, ensuring that all those who spend money on more than the basic necessities of life contribute to the common good.

I'd accept the replacement of income tax with consumption tax in a heartbeat. Those who are rich enough to spend more would automatically pay more tax by doing so. Those who are poor, and can't afford to spend much, would pay relatively little tax, because much of their money would (or should) be spent on basic necessities that aren't subject to taxation. Seems fair to me. What say you, readers?

As DanielS said, in Australia we were promised the GST would replace several taxes. Didn't happen. Now I think of it, the levy to pay for the gun buyback(s) is still in effect too, as far as I know.

The progressive Dumbocrats would love to "ape" their European Socialist pals by having a "Federal V.A.T" instituted.

Sure it'll start out low at 1 or 2 percent, but in Ireland it's currently 21&1/2 percent on many items. Hell, they give you a break on telephone and electricity charges. They only incur a 13&1/2 percent V.A.T.

Plus the V.A.T. is built into the shelf price so the consumer doesn't see the damn tax.

My preference would be a "Flat Tax."
Any and all income taxed at the same percentage regardless of wealth. That way everyone pays their share. Tax Corporations and other "Sheltered Entities" the same as everyone else too.
I think it would be nice to know how much you would pay without needing a degree in Economics.

If - and that "if" is a big one - any and all income taxes can be replaced with a consumption tax, and the people have the gumption to not let the politicians come back later to institute "a small graduated income tax" because of some imaginary emergency, a consumption tax is the way to go.

As for "protecting" the poor from the consumption tax, I live in Florida where unprepared food items - what we buy at the grocery store - are not subject to the state's 6% retail sales tax. Virginia, on the other hand, with a 4.5% retail sales tax, DOES tax unprepared food at 2%, and everyone pays it. During the 20 years I lived in VA I don't remember any crusades by the left (or anyone else) about "protecting the poor" by exempting them from that 2% food tax, so I think it may be possible to institute a consumption tax that applies to everyone.

Once we start carving out exemptions and special treatment for group X or Y, we're right back in the swamp of lobbyists leveraging congress to create a million pages of tax rules that require an army of accountants to oversee.

There's a very simple concept that can be applied: Everyone is treated equally. If the "poor" have a problem with a consumption tax, let them argue that it should be lower. For everyone.

I've always liked the idea of taxing everyone according to the budget. when Congress passes a budget for, say FY 2013, they then divide that monetary amount by the number of citizens over the age of 18 and everyone gets a bill telling them to pay that amount.

I guarantee you that there would be tax revolts in the street and demands to cut out every penny f wasteful spending once people actually understand that whatever congress decides to spend, the people individually and collectively have to reach into their pockets to pay.

Go farther and mandate that people who don't pay what they owe become ineligible to vote, and watch whole segments of the welfare classes drop off of the voting rolls. Maybe then certain politicians wouldn't feel the need to pander to those groups so much and would stop tossing them huge pails of other people's cash.

Murphy's Law, I seem to recall a couple of sci-fi books where that happened. Trouble was it didn't always work out as planned once the mass of non-taxed got large enough. Seems politicos liked turning them into rampaging mobs.

Granted, the US as it stands is not as distopian as those books. I kind of liked idea of having to present a statement of employment and/or fiscal responsibility (a year's worth of utility bills, a mortgage, pay stubs or your previous year's tax forms) when you go to vote.

And I'm with those who thing Congress would just add a VAT and then keep income taxes as well.
LittleRed1

To be fair we need to include in the tax paid the numbers payroll taxes, including medicare and FICA taxes. There was a time you could at least claim that these were quasi-insurance payments, not taxes, but with the instantaneous transfer of these taxes to the general account via borrowing in exchange for government debt certificates, these taxes are now effectively just additional income taxes.

If these numbers are included, the rich still pay a huge percentage of taxes, but the tax situation of the lower 50% is very different.

We have in effect a 16% tax on the first dollar of salary income. (the employer's part in reality comes from the worker if you think of the total cost of employing a worker). This combined tax rises to over 30% at a very low salary--under $10,000 for most workers.

I do not have the data at hand to show what the numbers are thus adjusted, but it does at least show that a large part of the lower 50% are paying quite a bit of taxes.

Also, may States and their local jurisdictions have income tax based on the Federal Income Tax Return. Much wrangling must occur, hundreds, or thousands, of laws and regulations must be changed.

While I would hope for a different tax system, I see little prospect of it ever occurring.

One final point. The chart you displayed (not of your making) does not reflect those who don't work or work "off books" and receive checks from the IRS, so-called "credits", even though not one thin penny was paid. All that must be done is to file a tax return. That costs 44 pennies and a visit to the free tax preparation clinic. Gotta love this country!

46% of all households pay no income tax. NONE.

But as you point out, there's other taxes. Payroll, FICA, etc. What about those?

Well, taking into account refundable tax credits, 25% of all households (not 25% of that 46%, mind you, this is of the TOTAL) pay none of those either.

Those numbers haven't been argued. Sure, people go over the significance of them, but it seems that they're reliable.

That's one in four households in the US contributing not one thin dime to the federal coffers. Tell us, how is that sustainable?

When you have nearly half of the population seeing government largesse as free money, it's no wonder entitlements bring out such strong support... they simply don't understand such things must be paid for.

There isn't near enough money to be had by soaking the rich. What's more, that desire to do so points at another belief- that it is just and right for a large and significant percentage to NOT contribute to funding the nation.

Want to raise taxes on the rich? We can discuss the elimination of tax breaks and the phasing out of other things (I'm a realist, there's no way to get to a balanced budget without giving the "soak the rich" crowd something), but let's also eliminate refundable tax credits and instate a base tax floor: 5% of the first $10,000 of income. That's $500. Call it the "we're all in it together" tax.

RP beat me to it... I've heard THAT mantra before for the 'poor' that they REALLY do pay more taxes, but I have yet to ever actually SEE a real document that supports that...

I wasn't arguing that the lower 50% pays any high percentage. I was just pointing out the false statement that 50% pay nothing. In reality, before correcting for earned income and other credits, taxes start at the first dollar, and are higher than we commonly think.

All the more argument for finding a way to start the whole tax system over from a clean slate. When even tax professionals and IRS advanced agents can't compute taxes twice and get the same number, we have a real problem.

Geoff
Who is a Fair Tax supporter.