Rowing to the North Pole?


An expedition has just left Resolute Bay in northern Canada in an attempt to row to the Magnetic North Pole (MNP) - or, at least, to Ellef Ringnes Island, which was the MNP's location in 1996 (it moves thirty to forty miles every year). The Telegraph reports:

They hope to make history by rowing 450 miles across the Arctic sea to the magnetic North Pole.

The trip to the Pole, which they estimate will take between four to six weeks, has not been done before. It is only possible now because of more ice-melt in the Arctic, organisers said. 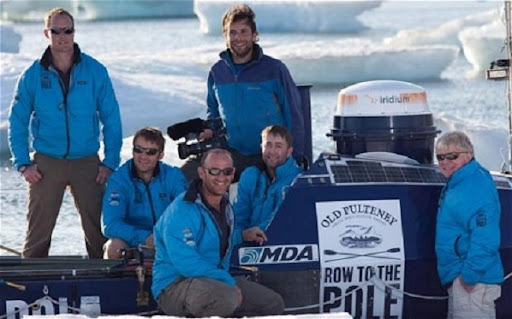 Mr Wishart is leading the Old Pulteney Row To The Pole challenge to highlight the effect of climate change on the ice around the polar regions.

He has taken part in two previous expeditions to the North Pole and has also rowed across the Atlantic Ocean.

Before setting off on Saturday, he said: "No one has ever attempted this before, so we are quite literally heading off on a voyage into the unknown.

"I've seen the satellite images showing a route through the ice in late summer for the last two years, so as the expedition leader, I'm looking forward to meeting the challenge for real and making a bit of history at the same time."

Team members will row in shifts to the North Pole.

In December a boat-cum-sledge designed to navigate the icy waters of the Arctic was unveiled, which the crew will use. 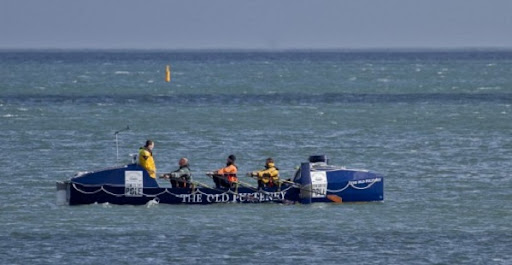 Built in Christchurch, Dorset, it is covered in fibres designed to withstand Arctic conditions while being light enough for the crew to pull. Its golden underside will help the men identify the vessel should it capsize.

I'll be very interested to see whether they make it through the ice to Ellef Ringnes Island. If they do, it'll be the clearest indication yet that the fabled Northwest Passage is becoming navigable for merchant shipping during the summer months. That could revolutionize seaborne trade between the Atlantic and Indian Oceans, and open up a new route between China and the eastern seaboard of North America (not to mention South America and Europe as well).

If you'd like to follow the progress of the expedition, the BBC will feature regular reports about it on a special section of its Web site.

Well if they wanted to just row to the magnetic north, why not wait until 2015 or 2025 when the northwest passage will be clear enough to water ski behind cruise boats.