I'm intrigued to learn that a transparent battery has been developed. Stanford University News reports:

It sounds like something out of a cheesy science fiction movie, but thanks to new research by several Stanford scientists, transparent cell phones are one step closer to becoming a reality.

"If you want to make everything transparent, what about the battery?" said Yi Cui, an associate professor of materials science and engineering and of photon science at SLAC National Accelerator Laboratory, renowned for his work with batteries.

With graduate student Yuan Yang, who is the first author of the paper "Transparent lithium-ion batteries" in the July 25 edition of the Proceedings of the National Academy of Sciences, Cui set out to create a clear battery suitable for use in consumer electronics.

Since key active materials in batteries cannot yet be made transparent or replaced with transparent alternatives, Yang and Cui realized that they had to find a way to construct a battery such that its nontransparent components were too small to be seen by the naked eye.

"If something is smaller than 50 microns, your eyes will feel like it is transparent," said Yang, because the maximum resolving power of the human eye is somewhere between 50 to 100 microns.

Yang and Cui devised a mesh-like framework for the battery electrodes, with each "line" in the grid being approximately 35 microns wide. Light passes through the transparent gaps between the gridlines; because the individual lines are so thin, the entire meshwork area appears transparent. 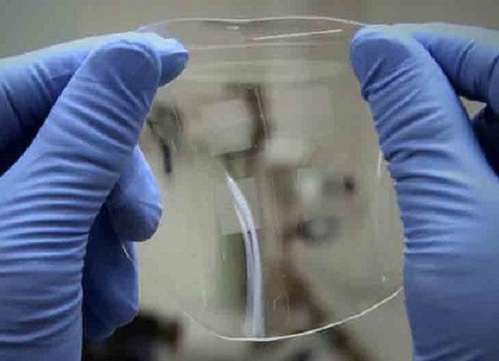 This was easier said than done. The pair finally came up with an ingenious three-step process that utilized low-cost, commonly available substances.

Perhaps best of all, the transparent battery is less expensive than one might expect.

"Its cost could be similar to those of regular batteries," said Cui. "Especially if we use low cost metals as current collectors, there is no reason this cannot be cheap."

The only current limitation is that the transparent battery is only about half as powerful as comparably sized lithium-ion counterparts.

"The energy density is currently lower than lithium batteries," said Yang. "It is comparable to nickel-cadmium batteries right now."

"It's very exciting for doing fundamental scientific research," said Cui. "You can study what is happening inside batteries since they are transparent now."

Grand contributions to science aside, though, there was definitely a bigger motivating force behind Yang and Cui's research.

"It just looks cool," said Cui. "I want to talk to Steve Jobs about this. I want a transparent iPhone!"

There's more at the link. Here's a video report about the breakthrough.

That's ingenious! Full marks to the researchers for first, thinking of the concept (which is hardly intuitive, after all!), and then for making it happen.

It is not only a great idea, but to be able to study and work in such a well-equipped environment must pure heaven. I am so envious. Thanks for the post.