I'm astonished at the sheer size of a vase sold recently at an auction in Boston. The Daily Mail reports:

At 6ft 3ins this colossus vase towers over most humans, needs hundreds of flowers to fill it and is likely to destroy your mantelpiece. 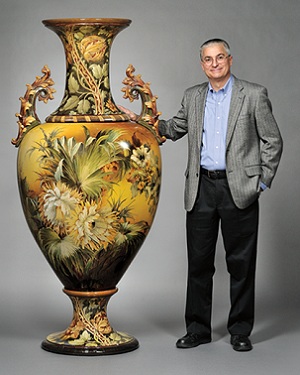 Made by Royal Doulton, it is the largest ever made and was snapped up at auction in the U.S. for £10,625.

Dating from the late 19th century it is thought that the decorative piece was commissioned for an Indian Maharajah who would have paid a princely sum of £3,500.

It is adorned with intricate floral designs by Florence Lewis - one of the Lambeth studio’s most skilled artists.

The ceramic - sporting dahlias among bamboo and exotic foliage - was included in the European furniture and decorative arts sale which took place at Skinner's auction house in Massachusetts this month.

Stuart Slavid, from the saleroom, said that the antique came through a dealer who acquired it in a private home: 'It had previously been purchased in a London sale in the 1980s.

'It's function is it's beauty as an art form and I personally believe the artistry translates better from a slight distance. The workmanship is first rate.'

Making it easier to transport the rare piece was manufactured in five separate pieces, with the collar, belly, base and handles slotting together and held together by its weight.

Frankly, I'm amazed Royal Doulton managed to fire so huge a creation without it warping in the heat. Doing it in five pieces must have helped, but ensuring that none of the pieces warped, and all fit together after firing, must have taken immense care in the production process. I wonder how many parts were discarded after firing before they finally got a set that fit together properly? And did they have to build a special oven to contain it?

The Brits had some superb ceramicists back inthe day.

They were huge, and had to be perfect (or bad bad things would happen to the plasma stability), and since they were huge had to be made so they would sag in the ovens into the perfect shape.

They worked well too, until the last old guys at the pottery retired and they could not longer be replaced the pots when they failed.

Probably to everyone's relief. After all: mercury plasma with enough power running through it to light up a small town in a ceramic box. Shudder.