The ultimate irony in religious intolerance


I note with displeasure that American Atheists is protesting - and taking legal action to prevent - the display of the 'World Trade Center Cross' at the 9/11 Memorial and Museum. 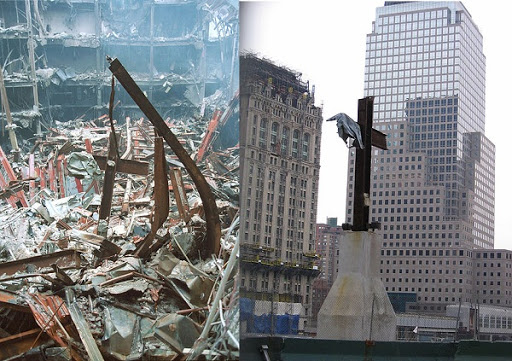 The World Trade Center Cross, as discovered in the ruins, and as displayed thereafter
(images courtesy of Wikimedia Commons)

The "government enshrinement of the cross was an impermissible mingling of church and state," the American Atheists say in a press statement.

The group says it filed the lawsuit this week in state court in New York and posted a copy of the lawsuit on its website.

"The WTC cross has become a Christian icon," said Dave Silverman, president of the atheist group. "It has been blessed by so-called holy men and presented as a reminder that their god, who couldn't be bothered to stop the Muslim terrorists or prevent 3,000 people from being killed in his name, cared only enough to bestow upon us some rubble that resembles a cross. It's a truly ridiculous assertion."

Leaving aside the complete lack of empathy displayed by American Atheists, who appear quite happy to disparage, denigrate and defy the personal faith of millions of Americans in order to make their point, let me point out three relevant facts.

I can't help but think that American Atheists, as a group and as individual members of that group, don't give a damn about that reality. Their ridiculous self-righteousness in this affair brings to mind another quote from the New Testament, which I submit they would do well to consider, irrespective of their religious (or irreligious) views. What sort of fruit are they displaying to the world through their present actions?

Well, the good news is that when the muzzies take over, the American Atheists's heads will be on the same chopping block as the other forms of religion.

If these Yo-Yo's don't believe in God, Why do they care ???????
Why are they protesting something
that they do not believe is there ????? Me thinks they need help!!!! Maybe the ACLU can comfort them, but I get my comfort
from a much greater source.

I thought the World Trade Center was privately own property?

I always ask those sorts of folks to show me where in the US Constitution is the "Separation of Church and State" clause. Of course, they can't show it, because it officially doesn't exist. That makes them even nuttier than they were just before their fruitless search.