A close encounter of the fishy kind!


I bet this photographer had a brown-trouser moment (or should that be a brown-wetsuit moment?) when this feeding whale shark came rather too close for comfort! 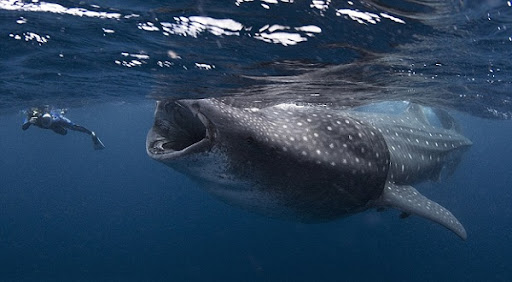 Just when you thought it was safe to go back in the water...

This diver almost got sucked into the mouth of a massive whale shark while it fed on thousands of plankton.

The shark, the sea's largest fish, is actually incredibly docile. The relieved diver escaped from the encounter unscathed and continued to enjoy the presence of the extraordinary animals.

The photograph was taken during a feeding frenzy where more than 600 of the 40ft animals gathered to feed on tuna spawn.

Whale sharks have mouths up to 1.5 metres wide that contain up to 350 rows of teeth. Despite their size, they do not pose a risk to divers.

Each year they converge in water off Mexico where they filter feed by sieving plankton from the water. They swim with their huge mouth open sucking masses of water filled with spawn into its jaws.

The largest of all fish, the whale shark - or Rhincodon typus - is found all tropical and warm seas.

Typically seen off-shore in the pelagic zone, near the top of the oceans, the slow-moving filter feeders have a life-span thought to be around 70 years.

There's more at the link, including more (and much larger) photographs.