It seems two Chinese men have established a new world record for being immersed in ice. What's On Xiamen reports:

Two Chinese men have set a new world record for endurance after standing encased in ice for two hours.

Chen Kecai, 52, and Jin Songhao, 54, stripped down to their swimming trunks and stepped into two transparent boxes. Ice was then poured in up to their necks. 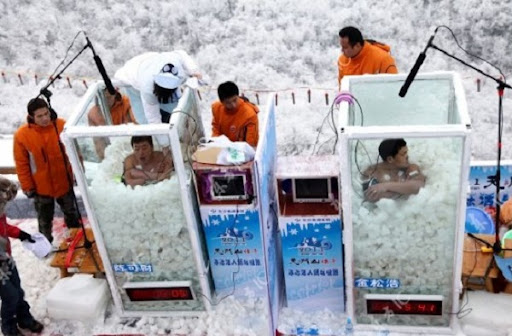 Mr Chen lasted for 118 minutes, after which medics pulled him out of the box because of a precipitous fall in his body temperature.

Mr Jin lasted for 120 minutes, even taking the time to write some Chinese calligraphy during the ordeal, penning a sign in praise of the Communist party. "I'm fine, I'm fine," he managed to say, upon being removed from the ice, his body having turned bright red.

Both Mr Chen and Mr Jin hail from the frozen Chinese province of Heilongjiang, or Black Dragon River, which borders Siberia, where temperatures can drop to -40° C [which is also -40° on the Fahrenheit scale] in winter.

I guess congratulations are in order to both men . . . but I can't help wonder what made them decide to try for a record like that. I mean, what's the point? A burning desire for frostbite?