The 2009 Wacky Warning Label Contest results are in!


To the joy of connoisseurs everywhere, the winners of the annual Wacky Warning Label Contest have just been announced.

A toilet seat that attaches to a trailer hitch has gained national recognition — for a warning label that says you'd better not use it while the vehicle is moving. "The Original Off-Road Commode" won this year's "Wacky Warning Labels" contest, organizers announced Wednesday. The contest, now in its 12th year, is intended to highlight claims that frivolous lawsuits have distorted the U.S. civil justice system.

Steve Shiflett of Hampton, Ga., won $500 for submitting the toilet seat's warning that it's "not for use on moving vehicles."

Hunters are a chief target audience for the toilet seat, which is sold by Wylie, Texas-based Convenient Sports International. The company is "very pleased" with the recognition, said Mike Willis, president of national sales.

The seat is not designed to lock onto a trailer hitch. Company officials added the warning about two years ago after learning that at least one consumer had modified their product and was driving around with it on the back of his vehicle.

"It was a concern because, 'What if, what if?'" Willis said.

Daniel Berganini of Fridley, Minn., won the second-place prize of $250 for a line in a wart-removal product's instruction guide that is unlikely to reach its targeted audience: "Do not use if you cannot see clearly to read the information in the information booklet."

Third place was a tie between a cereal bowl warning, "Always use this product with adult supervision," and a bag of livestock castration rings cautioning, "For animal use only." Michael Leonard of Yarmouth, Maine, and Freddy Krieger of Baroda, Mich., each won $100.

"Do not eat the LCD panel," warns a label on a 1-by-4-inch LCD screen, a finalist submitted by David Almcrantz of Goleta, Calif.

Past winners include a small tractor that cautioned "Danger: Avoid Death," and a warning not to put people inside a washing machine.

The contest, sponsored this year by the Foundation for Fair Civil Justice, has a serious edge, said organizer Bob Dorigo Jones, of Novi, Mich.

"We want to expose how the American civil justice system is out of whack, and this contest allows us to use humor as a hook to start an important debate over how much consumers and families spend because of frivolous lawsuits, how much more they spend on everything from medicine to automobiles," he said.

I love contests like this. They highlight the silliness and stupidity of our bureaucratically-burdened, litigious society - and also its cost to us all. As Bob Jones points out:

“Legal reform is urgently needed to help propel America’s economic recovery." says Dorigo Jones. "Companies need to be focusing on developing new products and jobs, not on defending themselves against frivolous lawsuits.

But today, the thickest section of any telephone book in the U.S. is the section advertising the services of personal injury lawyers, and that is not a recipe for an economic recovery. For America to thrive, we need to expand the labor market, not the litigation market.”

“According to the Pacific Research Institute,” continued Dorigo Jones, “$589 billion would be saved per year for investment in new jobs and consumer spending if U.S. tort-cost levels were comparable in relative size with other industrialized countries. This amount equals an annual 'litigation tax' for a family of four of more than $9,000."

I know how devastating such costs can be to manufacturers. For example, one can build a light sport aircraft oneself, from a kit, for $30,000 to $40,000. To buy the same aircraft from the manufacturer, fully built up - so that they carry any legal liability for flaws in construction or assembly - costs more than double that amount. The difference is partly labor costs, to be sure, but I'm told that over 25% of the total price is to pay for liability insurance. That's a heck of a premium! It's no wonder that some manufacturers have left the private aircraft market altogether, finding such costs impossible to bear.

In 2007, on the tenth anniversary of the awards, Jones published a book entitled 'Remove Child Before Folding: The 101 Stupidest, Silliest, and Wackiest Warning Labels Ever'. 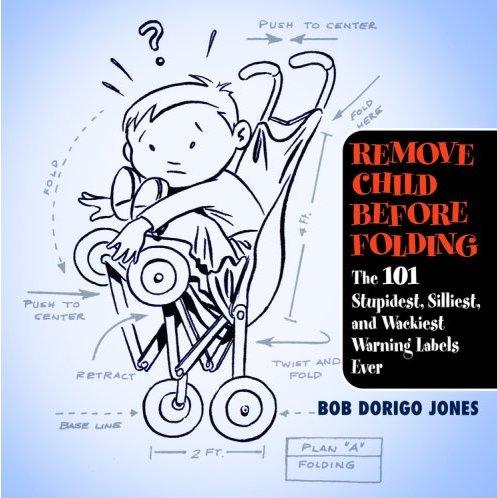 It's a must-read for those interested in this sort of stupidity. The 2007 winners were:


Ah, lawyers and bureaucrats . . . I think it's time we seriously considered Shakespeare's advice concerning them!

The sad part is that every warning came about because somebody tried to do that thing and then probably sued. Best way to end the frivolous ones is Loser Pays. Suits are so expensive to defend that insurance companies write a check because it is cheaper than defending. But if the loser in a suit is forced to pay all costs then it becomes feasible to defend. Plus then the person who is truly harmed can still be compensated. Because after all there are some truly negligent companies out there.