Now this is bizarre!


I've heard of weird medical conditions - but how about a tree, growing in your lungs?

A five-centimeter [about two-inch] fir tree has been found in the lung of a man who complained he had a strong pain in his chest and was coughing blood.

The 28-year-old patient, Artyom Sidorkin, came to a hospital in the city of Izhevsk in Central Russia last week, Komsomolskaya Pravda daily reports.

Doctors x-rayed his chest and found a tumor in one of the lungs. Suspecting cancer, they made a decision to perform biopsy, but when they cut the tissue, they were amazed to see green needles in the cut.

“I blinked three times, and thought I was seeing things. Then I called the assistant to have a look,” says Vladimir Kamashev, doctor at the Udmurtian Cancer Center. 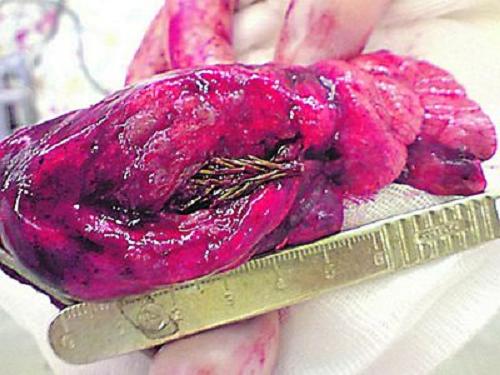 It is obvious that a five-centimeter branch is too large to be inhaled or swallowed, doctors say. They suggest that the patient might have inhaled a small bud, which then started to grow inside his body.

I have to admit, I've never heard of anything like that before! The thought of a tree actually beginning to grow in one's lungs is just too bizarre to contemplate . . .

EDITED TO ADD: Seems this gentleman's not alone. A Massachusetts man had a pea take root and grow in his lung!