I'm trying to get my tongue around this story. 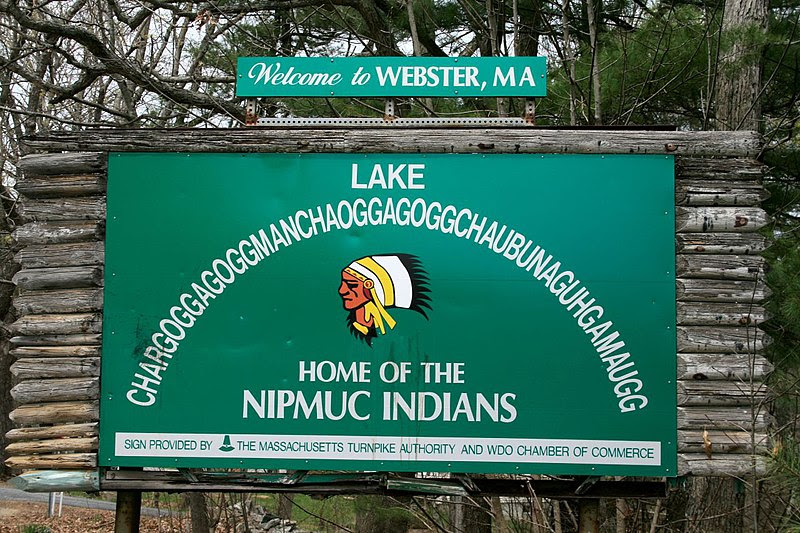 Signs for the difficult-to-spell-and-say lake will be fixed.

The Webster-Dudley-Oxford Chamber of Commerce’s board of directors has unanimously agreed to correct the spelling problems on the signs on Route 12 near Oxford and Route 193 near Thompson.

The chamber is researching its records to find out who painted the signs. The signs will either go back to that company or another will handle the correction, according to Eleanor F. Houbre, director of chamber services.

Lake Chargoggagoggmanchauggagoggchaubunagungamaugg is the most widely accepted spelling of the name of the the 3-mile long, 1-milewide lake.

The U.S. Geographic Names Information Systems Web site lists about two dozen variations of the lake’s spelling, but none that corresponds with the chamber of commerce signs, which where replaced in 2003.

According to Wikipedia, the lake has many variations in spelling and in pronunciation. It's certainly one of the more entertaining - and tongue-twisting - Wikipedia articles I've ever read!

So . . . if even the authorities aren't sure how to spell the damn thing, why not simply rename it - preferably with a name less destructive to the tongue?

"which where replaced in 2003."And the irony of the article about incorrectly spelled signs having incorrect spelling itself?

I grew up near there, and that spelling doesn't match my recollection. The meaning of the name, by the way, was told to me by my mother; it means "You fish on your side, I fish on my side, and nobody fish in the middle."

Why not rename the lake to fit the sign? It would save a lot of trouble.