While I was gallivanting around south-eastern Texas, the Hubble Space Telescope celebrated 19 years of service since its launch on April 25th, 1990. 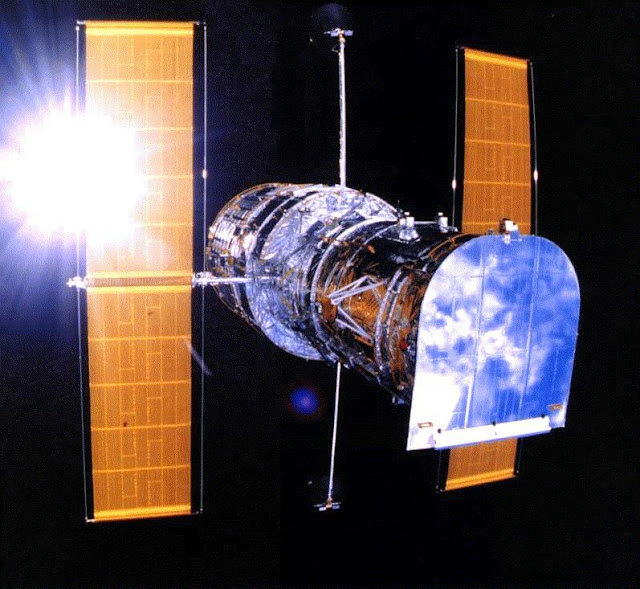 This remarkable instrument has advanced scientific investigation of the cosmos to a degree previously unimaginable. NASA has supplied the following 'factoids':

To celebrate the anniversary, NASA released this picture of the Arp 194 system of galaxies, also known as the so-called 'Question Mark Galaxy'. Click the image for a larger view.

NASA describes the photograph and Arp 194 as follows:

To commemorate the Hubble Space Telescope's 19 years of historic, trailblazing science, the orbiting telescope has photographed a peculiar system of galaxies known as Arp 194. This interacting group contains several galaxies, along with a "cosmic fountain" of stars, gas, and dust that stretches over 100,000 light-years.

The northern (upper) component of Arp 194 appears as a haphazard collection of dusty spiral arms, bright blue star-forming regions, and at least two galaxy nuclei that appear to be connected and in the early stages of merging. A third, relatively normal, spiral galaxy appears off to the right. The southern (lower) component of the galaxy group contains a single large spiral galaxy with its own blue star-forming regions.

However, the most striking feature of this galaxy troupe is the impressive blue stream of material extending from the northern component. This "fountain" contains complexes of super star clusters, each one of which may contain dozens of individual young star clusters. The blue color is produced by the hot, massive stars which dominate the light in each cluster. Overall, the "fountain" contains many millions of stars.

These young star clusters probably formed as a result of the interactions between the galaxies in the northern component of Arp 194. The compression of gas involved in galaxy interactions can enhance the star-formation rate and give rise to brilliant bursts of star formation in merging systems.

The details of the interactions among the multiple galaxies that make up Arp 194 are complex. The shapes of all the galaxies involved appear to have been distorted, possibly by their gravitational interactions with one another.

Arp 194, located in the constellation Cepheus, resides approximately 600 million light-years away from Earth. It contains some of the many interacting and merging galaxies known in our relatively nearby universe. These observations were taken in January of 2009 with the Wide Field Planetary Camera 2. Images taken through blue, green, and red filters were combined to form this picturesque image of galaxy interaction.

Fascinating! Prior to Hubble we'd never have been able to see this level of detail; and Hubble's successors (if we can afford them) will reveal even more. Let's hope NASA receives the funding it needs for those successors, and to keep Hubble in operation for as long as possible.

Congratulations to the agency on nineteen fruitful, productive years of Hubble research.