I was delighted to receive an e-mail today from Tony Hall in England. He'd read my article in February about David Mach, an artist who creates works from matchsticks. He thought I'd like to hear about his father, Jack Hall, and what he'd accomplished using the same medium.

Tony provided a link to an article he'd written, and I was fascinated! Here are some extracts. 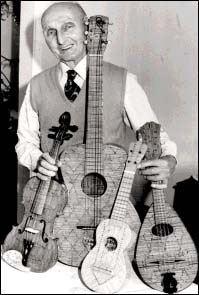 Jack Hall from Brighton, England, couldn't pick, strum, or draw a bow, but when it came to building stringed instruments, he had an amazing talent. You see, every inch of the instruments he built is made entirely with used matchsticks. Yes, dead matches.

Jack a seaman in the Merchant Navy, conceived the idea out of boredom. In the 1930s, he served as a deck-hand on the American owned tramp steamer Eastwick. Daily routine in those days was monotonous and during the long off-watch hours there was literally nothing to do, as Jack explained, "You had to make your own amusement or you either went mad or melancholy."

With a natural sense of tidiness, Jack picked up matchsticks from around the ship discarded by his fellow crewmen. Then, sitting at the small mess table, he idly passed the time laying them out into various patterns, when the thought struck him that enough of them, glued together, would make a board that could be put to some useful purpose. He contrived a glue pot (an empty tobacco tin and an oldsaucepan from the ship's galley) and, with carpenter's glue and a small collection of used matchsticks, built his first layer of timber. Unfortunately, this attempt proved unsuccessful; it didn't provide enough strength to work with. Undeterred, he continued to experiment and glued a second layer crosswise. Success! He was rewarded with a sturdy two-ply board, and a new idea was born. Jack began building his matchstick instruments - in response to a challenge from a shipmate, who jokingly said, "Why don't you make a fiddle and strike up a tune?" "Why not?" thought Jack with a grim determination. An SOS went out to his relatives and friends, pleading with them not to throw away their matchsticks, but to send them to him as, and when, convenient. From then on, whenever the Eastwick arrived in port,he could depend on his mail containing packets of used matchsticks.

Jack had no carpentry skills and no knowledge of instrument making, so while his ship was in port, he would go ashore and check out a pawnshop to study the measurements, weight and feel of a fiddle. Then, back to the ship with his rudimentary pencil sketches and measurements, to begin his self-imposed task. 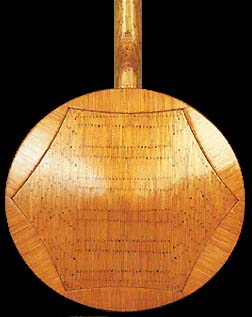 Working five hours a day for six months, he singly glued together more than 20,000 matchsticks (with approximately three pounds of carpenter's glue) that he whittled down to 14,000 to complete the fiddle, with another 1,000 each forming the chin-rest and bow. Although he was no musician (he couldn't read or play a note), it was nevertheless a proud moment for him when he walked into the ship's mess room, tuned up the fiddle, and played a few unorthodox notes to the rousing acclamation of his shipmates. What had started as a challenge now became a compulsion: between 1936 and 1939, he built a Neopolitan mandolin, an acoustic guitar, a larger 12-sided flat back mandolin of his own design, and a tenor banjo.

A striking characteristic of Jack's work is the beautiful ornamentation. When asked how he created these ingenious designs, he replied, "This gave me much more work. I sorted out and hand-picked from the piles of matchsticks- only those with even-sided square burnt ends. Then every one of them had to be individually cut down to variable measured lengths, so that I could interlock the blackened, burnt match-heads to form decorative patterns."

The outbreak of World War II curtailed Jack's matchstickology. He was discharged in 1945 and, once back in civvies, never found the time again to return to his great passion with the same intensity. The instrument collection went into the attic until 1951, when it was displayed at the Festival of Great Britain, a centenary exhibition.

It was brought out and dusted down again 25 years later when, in 1976, a Radio Brighton reporter/amateur musician heard of the rumoured collection and Jack's dilemma that, since he made them 40 years prior, he had never heard them played and was longing for someone to do so. The reporter could play a few stringed instruments so he visited Jack's house to see if he would be able to get a tune out of them. What happened that day was quite remarkable: not only did the banjo, the mandolins, and the guitar play well, the sound was unbelievable. (Around this time, incidentally, Jack added a recorder to the collection, and in 1984 a ukelele.) 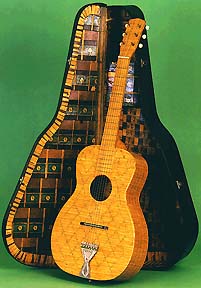 In 1991 Jack's dream was fully realized when a quintet (or, as Jack joked, a 100,000 piece band) of professional musicians played the instruments live on BBC television! Learning that Jack favored American country music, they performed 'Jambalaya' and players and viewers alike were astonished, no-one believed they would sound so good. Jack was asked how he managed to produce such wonderful sounds from almost nothing. He replied, "I just don't know. All I did was sit down with a big pile of matchsticks and made myself an instrument."

When Jack died six years ago, aged 86, little did he know his spectacular achievements would create such an impression more than sixty five years later. The collection is loaned out for public display and performance at music venues, festivals, and museums. Lately, the entire set was tuned up again for a performance of 'Billy in the Low Ground' on BBC television. Lord Yehudi Menuhin,Albert Lee, and many other eminent musicians have beenastounded at Jack's incredible craftsmanship. Super star Glen Campbell on a recent UK tour, took time out to praise and play the guitar and banjo, saying, "I couldn't believe they were actually made entirely of matchsticks. I played the Guitar and banjo and they sounded very professional. The patience and skill of Jack Hall was truly amazing."

Author Tony Hall, says, "My father was an ordinary man with an extraordinary talent. When you see and realise the extent of human imagination, effort and endeavour, the perception is one of an unrivalled piece of craftsmanship, ingenuity and improvisation. I consider it a great honour and a privilege to look after and cherish his collection. A lasting legacy, the like of which will probably never beseen again. These works of art are not match-less but, however, they are matchless."

There's more information and pictures at the link.

Tony also included this link to a YouTube video of his father's instruments in use. First we see the famous Glen Campbell performing 'Amazing Grace' and talking about Jack Hall's guitar. Then, 'The Matchsticoustic Men' play 'Billy In The Low Ground'. At about 5 minutes 52 seconds into the clip, you'll see Jack himself, playing an instrument known (doubtless tongue-in-cheek!) as 'the knackers', with The Match Quintet. Finally, two British musicians play a country duet, 'Rollin' In My Sweet Baby's Arms'.

Wonderful stuff! Thanks, Mr. Hall, for your e-mail, and the news of your father's accomplishments. I'm delighted that you're continuing to circulate his instruments among musicians, and that we can enjoy them today.

WOW! that is fantastic!

There's nothing like a bunch of stuffed shirts to take the soul out of Jumbalaya. I had to laugh at that. But it was worth it to see the instrument maker himself. Great story, and great video.