Economy comes at a price


The Insurance Institute for Highway Safety (IIHS) has just conducted a series of tests designed to see how smaller cars fared when in collision with mid-size vehicles. The results were most interesting. From their press release:

"There are good reasons people buy minicars," says Institute president Adrian Lund. "They're more affordable, and they use less gas. But the safety trade-offs are clear from our new tests. Equally clear are the implications when it comes to fuel economy. If automakers downsize cars so their fleets use less fuel, occupant safety will be compromised. However, there are ways to serve fuel economy and safety at the same time."

The Institute didn't choose SUVs or pickup trucks, or even large cars, to pair with the micro and minis in the new crash tests. The choice of midsize cars reveals how much influence some extra size and weight can have on crash outcomes. The Institute chose pairs of 2009 models from Daimler, Honda, and Toyota because these automakers have micro and mini models that earn good frontal crashworthiness ratings, based on the Institute's offset test into a deformable barrier. Researchers rated performance in the 40 mph car-to-car tests, like the front-into-barrier tests, based on measured intrusion into the occupant compartment, forces recorded on the driver dummy, and movement of the dummy during the impact.

Laws of physics prevail: The Honda Fit, Smart Fortwo, and Toyota Yaris are good performers in the Institute's frontal offset barrier test, but all three are poor performers in the frontal collisions with midsize cars. These results reflect the laws of the physical universe, specifically principles related to force and distance.

Although the physics of frontal car crashes usually are described in terms of what happens to the vehicles, injuries depend on the forces that act on the occupants, and these forces are affected by two key physical factors. One is the weight of a crashing vehicle, which determines how much its velocity will change during impact. The greater the change, the greater the forces on the people inside and the higher the injury risk. The second factor is vehicle size, specifically the distance from the front of a vehicle to its occupant compartment. The longer this is, the lower the forces on the occupants. 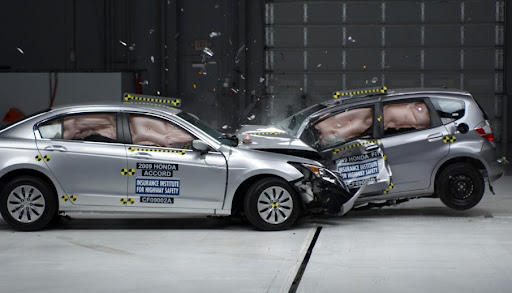 Crash statistics confirm this. The death rate in 1-3-year-old minicars in multiple-vehicle crashes during 2007 was almost twice as high as the rate in very large cars.

"Though much safer than they were a few years ago, minicars as a group do a comparatively poor job of protecting people in crashes, simply because they're smaller and lighter," Lund says. "In collisions with bigger vehicles, the forces acting on the smaller ones are higher, and there's less distance from the front of a small car to the occupant compartment to 'ride down' the impact. These and other factors increase injury likelihood."

The death rate per million 1-3-year-old minis in single-vehicle crashes during 2007 was 35 compared with 11 per million for very large cars. Even in midsize cars, the death rate in single-vehicle crashes was 17 percent lower than in minicars. The lower death rate is because many objects that vehicles hit aren't solid, and vehicles that are big and heavy have a better chance of moving or deforming the objects they strike. This dissipates some of the energy of the impact.

Some proponents of mini and small cars claim they're as safe as bigger, heavier cars. But the claims don't hold up. For example, there's a claim that the addition of safety features to the smallest cars in recent years reduces injury risk, and this is true as far as it goes. Airbags, advanced belts, electronic stability control, and other features are helping. They've been added to cars of all sizes, though, so the smallest cars still don't match the bigger cars in terms of occupant protection.

Yet another claim is that minicars are easier to maneuver, so their drivers can avoid crashes in the first place. Insurance claims experience says otherwise. The frequency of claims filed for crash damage is higher for mini 4-door cars than for midsize ones.

There's more at the link. What's not stated in the IIHS press release is that larger, heavier vehicles than mid-size cars can just about flatten a compact car in a collision. I've seen the results when a Ford F150, or Chevy Silverado 1500, or Dodge Ram 1500, collide with a sub-compact car. For the latter (and its occupants) they're not pretty.

Here are two video clips from the IIHS tests. The first shows a Mercedes C300 versus a Smart ForTwo; the second, a Toyota Camry versus a Toyota Yaris. In each case, note how far the larger, heavier car's front penetrates into the bodywork of the lighter car - right back into the passenger compartment. Scary!


So, friends, if you want to save money on gas, and are considering buying a small car to that end, you might want to reconsider. What's a few extra gallons of gas each month compared to the lives of your loved ones who'll be traveling in the vehicle?

Speaking for myself, I'll stay with a larger vehicle: and if I have to buy another vehicle for anyone else dear to me, it'll be a used larger vehicle. I'll pay more for gas, but counterbalance that with the savings on the purchase price. I won't put someone I love behind the wheel of a compact or sub-compact car - not with evidence like that to consider!

Years ago, I was nearly involved in a head-on collision at 40mph when an idiot took the wrong side on a divided highway. Lucky me, I had another lane to dodge into.

I saw a Mini Cooper that had been pulverized in a car accident. I only knew it was a Mini because part of the rear end was still intact.

Now the .gov is killing GM because it builds large, inefficient vehicles instead of light, efficient 'smart cars'.

So how many millions (oops - billions) do you suppose they spent proving Newton's second law?

There was a Mythbusters tv episode with a rocket-propelled vehicle being slammed into a concrete target at near-sonic velocity. There were few pieces left that could even be identified as coming from a vehicle. Energy is proportional to mass, but also to velocity SQUARED, and all that energy has to be spent in a wreck, so speed will likely be a lot more significant than mass.