A hero of a different kind


We tend to think of heroism as a human characteristic: but it's been displayed on our behalf by our animal companions for many generations. One such hero was remembered at an auction in London recently.

Rip was made homeless after the Luftwaffe attacked Poplar, East London, in 1940. He somehow survived the bombing but was left to roam the streets, probably stealing scraps to keep himself alive.

One day he came across an Air Raid Precaution Warden called King, and befriended him. Mr King tossed him titbits in the hope that he would go away.

But that brief gesture led to a partnership which endured for the war - and in every sense, for King and country.

Far from disappearing, Rip volunteered for duty and became the unit's first mascot - then, crucially, the service's first sniffer dog.

It wasn't a question of training him, Mr King noted at the time - they simply couldn't stop him.

Rip instantly showed a talent for locating people buried in bomb debris, mostly around the badly hit dock area that became a prime target during the Blitz. 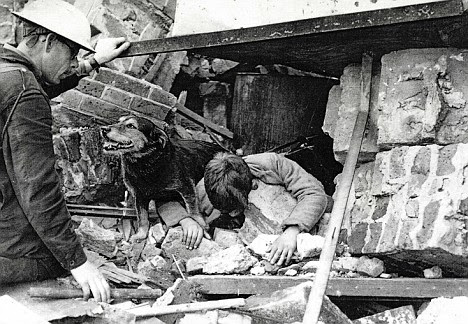 Despite the dangers, he worked courageously through the crashing and explosions of the bombing raids, braved fire and smoke with apparent disdain, and was completely unfazed by the air-raid sirens that used to strike fear into the hearts of the population.

The first sign that someone was trapped in the rubble was a twitching and sniffing of his sensitive nose.

So keen was he to follow it through that he dug at the fallen bricks and masonry like a Jack Russell looking for a rabbit (a trait assumed to have been passed down through what was clearly a highly complex ancestry).

After blackout he would accompany Mr King on his nightly tour of street shelters, always welcoming a tasty treat from grateful people he met.

It was largely due to Rip that the authorities later decided to train dogs formally to trace casualties.

In July 1945, his uncommon valour earned him the PDSA Dickin Medal, two years after it was introduced by the veterinary charity's founder Maria Dickin. He wore it proudly on his collar until he died. 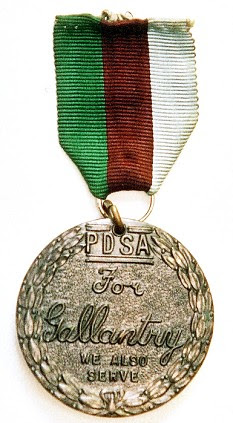 The bronze medal was given to animals displaying 'conspicuous gallantry and devotion to duty' serving or associated with the Armed Forces or Civil Defence units, and has since been awarded to animals involved in Iraq.

When Rip died, he became the first of a succession of 'supreme animal heroes' to be buried in the PDSA cemetery in Ilford, Essex.

The headstone inscription reads: 'Rip, D.M., "We also serve" - for the dog whose body lies here played his part in the Battle of Britain.'

There's more at the link. According to the Houston Chronicle, Rip's Dickin Medal fetched over $35,000 at auction last Friday.

I wonder whether the USA ever introduced any comparable medal, whether official or private, for courageous animals? I've read of the 'war dogs' used by our armed forces, for example. Were there ever any awards for their courage? If anyone knows, please tell us more in Comments.

I can't find it right now, but I thought that I read recently that a dog was awarded the Purple Heart, only to have it rescinded due to the fact that this award is only to be given to humans.

A war dog in WWII called Chips recieved both the Silver Star and the Purple Heart, but both medals were rescinded when the Order of the Purple Heart complained that it demeaned all the men who'd received it.

No medals have been awarded American service dogs or horses since.