I'm fascinated to read, on Wired magazine's Web site, of the Georgia Guidestones. I'd never heard of them before.

The strangest monument in America looms over a barren knoll in northeastern Georgia. Five massive slabs of polished granite rise out of the earth in a star pattern. The rocks are each 16 feet tall, with four of them weighing more than 20 tons apiece. Together they support a 25,000-pound capstone. Approaching the edifice, it's hard not to think immediately of England's Stonehenge or possibly the ominous monolith from 2001: A Space Odyssey. Built in 1980, these pale gray rocks are quietly awaiting the end of the world as we know it. 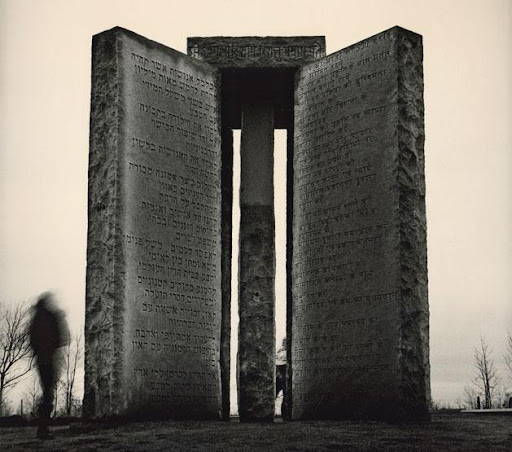 Called the Georgia Guidestones, the monument is a mystery — nobody knows exactly who commissioned it or why. The only clues to its origin are on a nearby plaque on the ground - which gives the dimensions and explains a series of intricate notches and holes that correspond to the movements of the sun and stars — and the "guides" themselves, directives carved into the rocks. These instructions appear in eight languages ranging from English to Swahili and reflect a peculiar New Age ideology. Some are vaguely eugenic (guide reproduction wisely—improving fitness and diversity); others prescribe standard-issue hippie mysticism (prize truth—beauty—love—seeking harmony with the infinite).

What's most widely agreed upon — based on the evidence available — is that the Guidestones are meant to instruct the dazed survivors of some impending apocalypse as they attempt to reconstitute civilization.

Whoever the anonymous architects of the Guidestones were, they knew what they were doing: The monument is a highly engineered structure that flawlessly tracks the sun. It also manages to engender endless fascination, thanks to a carefully orchestrated aura of mystery. And the stones have attracted plenty of devotees to defend against folks who would like them destroyed. Clearly, whoever had the monument placed here understood one thing very well: People prize what they don't understand at least as much as what they do.

There's a great deal more at the link, including the accounts of those who supervised the building of the Guidestones.

Wikipedia quotes the text of the English inscription on the Guidestones as follows:

Maintain humanity under 500,000,000
In perpetual balance with nature

Rule passion — faith — tradition
And all things
With tempered reason

Protect people and nations
With fair laws and just courts

One does wonder who was behind them, though, and why they went to the trouble and expense of erecting them. Were they trying to produce a New Age version of the ancient and never-fully-understood Medicine Wheel in Bighorn National Forest, Wyoming (shown below)? 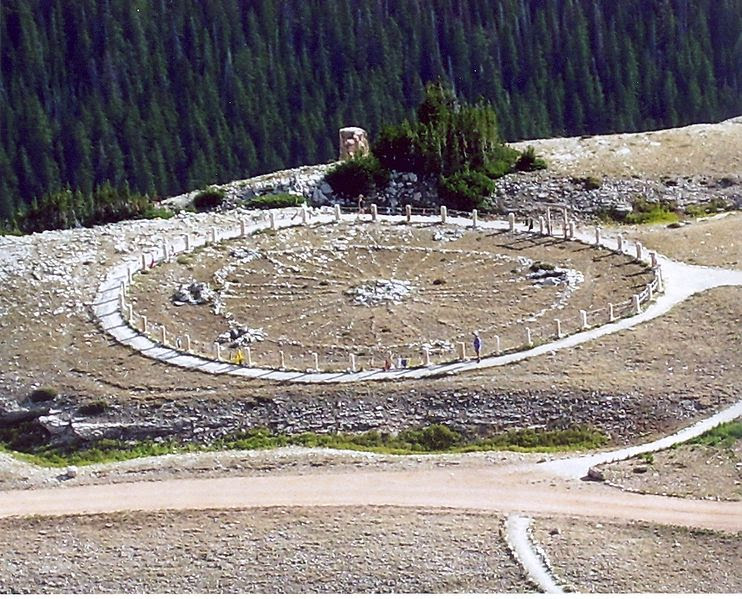 Are the Guidestones, indeed, intended to be an instruction manual for survivors of an apocalypse?

If you're willing to pull out your tin foil hat, such a world is an eventual goal of the new world order. The Nazis weren't the only ones interested in eugenics either. Give it a few hundred years to weather, and you'd be able to claim religious authority as well as being part of the elite.

They needed to include a picture dictionary to explain the concepts they laid out.

Just imagine a future viewer looking at the pretty markings who doesn't know how to read and wouldn't know the language anyway.

OK, I read the instructions on the stone and have no trouble imagining how wretchedly any group of people would make themselves trying to deploy them as guides to social organization. For instance, who gets to decide whose children represent 'excess' population? Any whose version of "The Infinite" gets venerated? And the whole inducement to eugenics just chills my blood.

I used to hang out with people who wrapped themselves in such airy pontifications and then I left psychedelics and spiritual posturing behind. I'm just surprised that there existed enough capacity amongst the lot to focus and plan for such a monument.

What a waste of human hubris!