Our double centenary Doofus is from Italy.

A furious fiancee dumped her boyfriend after catching him fondling another girl's boobs on Facebook just days before their wedding.

She and a pal printed and stuck up hundreds of posters at train stations and office blocks around the city where her fiance and their friends work.

A picture - taken from Antonio's Facebook profile - shows him nestling his head between a girl's naked boobs. 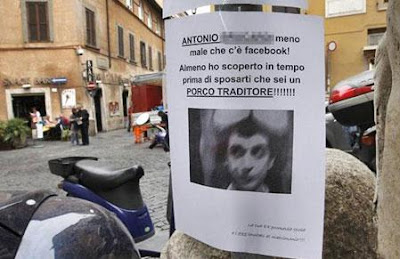 "Thank goodness there's Facebook! At least I've disovered you're a traitor pig before the wedding! Signed, your former betrothed bride and the 548 guests of our wedding," wrote Valeria, 28.

Yep - if you're idiot enough to want to cheat, keep it private!

it's just an unconventional adv to promote the movie Feisbum http://www.feisbum.com/episode.php?id=1