Back in October last year I wrote about God and human delusions: purported images of Divine subjects that have 'appeared' in ordinary items. Some have lasted, some haven't, but none has ever been proven to be anything but accidental and coincidental.

Two new such appearances have hit the news this week. One, in England, concerns a man who found the 'face of Jesus' in a bite mark in his chocolate bar.

A chocolate fan has taken the biscuit after finding an image of Jesus after biting into a Kit-Kat. 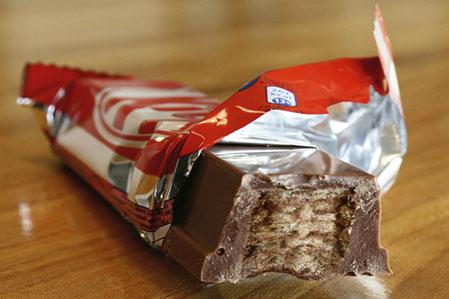 The astonishing vision emerged on Good Friday after a website called for oddball religious discoveries.

"I was amazed. I just took a bite and then I saw the face of Christ in it," the finder told the NU.nl Dutch website.

The second is from Maine, where a New Gloucester luthier, Joe Lepore, says he found the face of Christ on a guitar he'd just made. 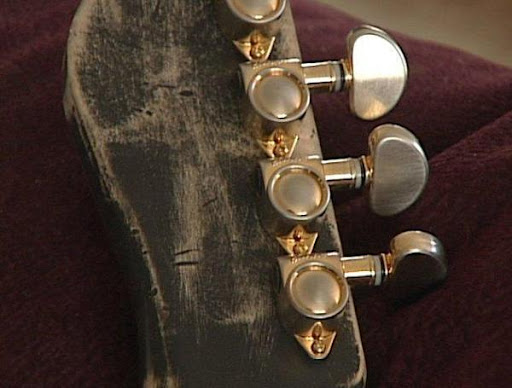 Personally, I can't see a face on that guitar: but I can see the semblance of a face in the bite mark on the chocolate bar, if I stretch my imagination. Needless to say, I don't think either image is of Divine origin!

(On the other hand, if a guitar is instrumental in someone's salvation, who am I to complain? There's no need to get highly strung about it!)

I think the gentleman was mistaken about the face on the candy bar-- I think it was emulating the shroud of Turin.

We had just moved into a house in Western NY in 1987 which had not been completely cleaned. As the children explored their new abode we hear a shout from my youngest son. "I found the Lord!" We ran upstairs, me laughing and found that someone had left a ceramic bust of Jesus in an upstairs closet.

Just glad it wasn't an old piece of toast.

Last month I blogged about the phenomenon of pareidolia - and included this link to what I think is one of the most unusual (and irreverant) instances of divine imagery ever seen.

No Peter: I think the guitar guy is just stringing us along...