This is a somber anniversary. On April 30th, 1975, the city of Saigon and the Republic of South Vietnam fell to the advancing North Vietnamese Army.

In the days prior to the collapse of South Vietnam, a flawed evacuation, Operation Frequent Wind, was conducted to get US personnel and many of their South Vietnamese collaborators out of the country. They were flown by helicopter to US Navy ships offshore. 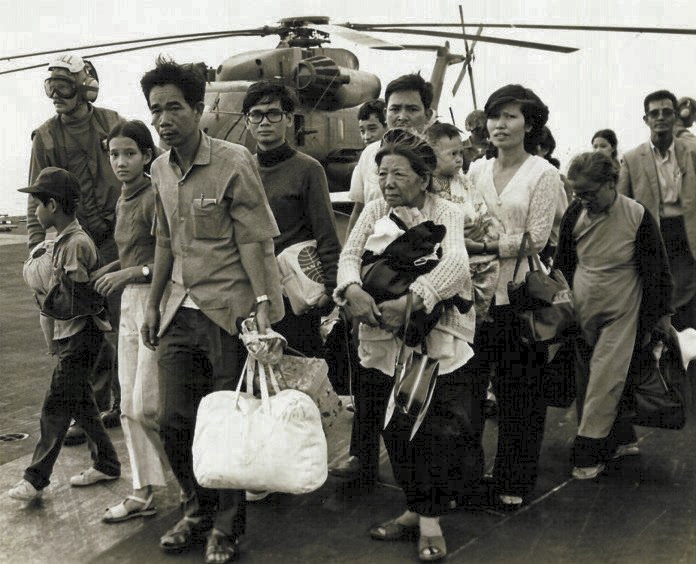 Many more were flown out by Vietnamese helicopters. There was no room aboard the US ships for so many aircraft. Many had to be pushed overboard after landing to make room for more arrivals. Others were deliberately ditched in the sea by their pilots, who were rescued, along with their passengers, by small craft. 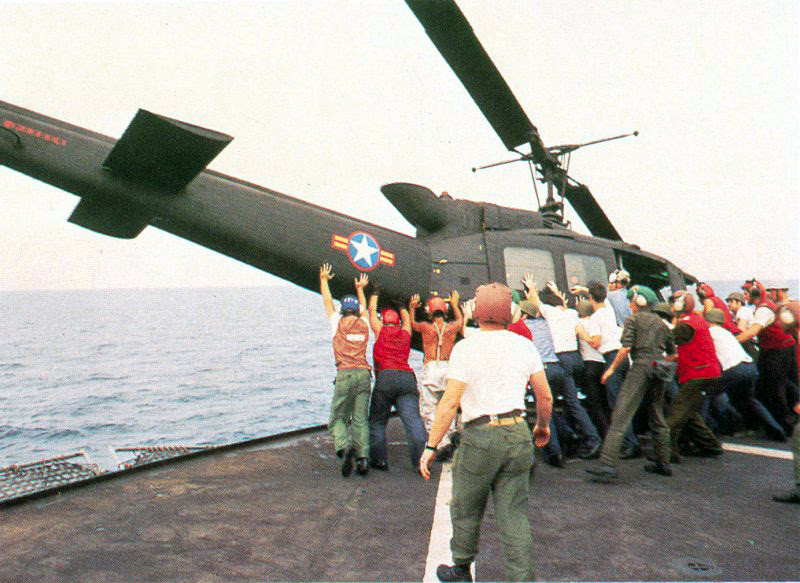 The US Ambassador to South Vietnam, would later testify before Congress that over 22,000 out of some 90,000 persons associated with the Embassy were evacuated. However, these figures took no account of the untold number of South Vietnamese who collaborated or served with the US armed forces, the CIA, and other bodies. The total at risk of reprisal from the North Vietnamese conquerors was probably well in excess of a million persons. To add to their danger, many confidential US records were not destroyed during the evacuation, but abandoned, to be recovered by the invaders for scrutiny at their leisure.

The victory of North Vietnam was an immense international humiliation for the USA, and probably contributed significantly (along with the Watergate scandal) to Jimmy Carter's victory in the next Presidential election. The real tragedy is that it need not have been a humiliation at all. The Vietnam war could have been won within a matter of a year or two in the mid-1960's, if only US politicians had been willing to let the military use its power to destroy North Vietnamese infrastructure, so that it no longer had the capacity to wage war. When such attacks were mounted in later years, including the mining of ports and the Linebacker bombing campaigns, the North Vietnamese proved vulnerable, and were forced back to the negotiating table. It would not have been impossible - although probably costly - to achieve the same thing many years earlier, and ended the war by 1967 or 1968. However, political interference meant that the opportunity was never grasped.

Fortunately, that lesson was well learned by the US military. In the decade following the end of the Vietnam war, it rebuilt itself, and applied the lessons learned at both strategic and tactical levels. By the time of the first Gulf War it had emerged as a supremely professional armed force, the most capable in the world, and to a large extent this is still true today (although the ongoing strain of operations in Iraq and Afghanistan has drained its reserves and stretched it to the limit).

Nevertheless, today is a time to remember those abandoned by the US to their advancing enemies. As former South Vietnamese President Nguyen Van Thieu said in his resignation speech on April 21st, 1975:

Is an American's word reliable these days? ... The United States did not keep its promise to help us fight for freedom and it was in the same fight that the United States lost 50,000 of its young men.

The fall of South Vietnam is a permanent blot on this country's record, and one of which we should rightly be ashamed. May such a thing never happen again!

Once upon time, I may have been told that US assets may (or may not have) turned out well in the end . . .

As the pin on my American Legion cap says "We were winning when I left". Then the politicos skREWed the program...

..., "Operation Frequent Wind, was conducted to get US personnel and many of their South Vietnamese collaborators out of the country."

Peter, "collaborator" is a perfectly innocuous word when one is referring to (for example) co-authors or editors, but it's not a good choice in this context.

Most of us (even though I was just a teenaged boy at the time of those events) prefer to call them our allies.