Today Miss D. and I journeyed out to the Alamo Liaison Squadron at Cannon Field, South of San Antonio. We had a great time. 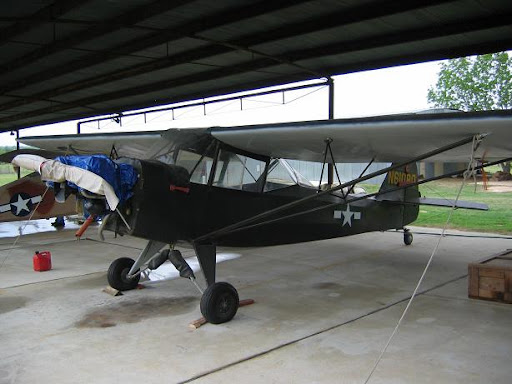 The ALS operates over half-a-dozen World War II-vintage liaison aircraft, and is rebuilding others. Some of its members own their own planes as well. The aircraft are in an amazingly good state of preservation, particularly considering (as ALS members point out) that when they were built, they weren't expected to survive long enough under combat conditions to need a 100-hour checkup! That says a lot for the pilots who flew them.

Being a pilot, Miss D. spent most of the time talking with the owners and pilots. I rapidly learned that when pilots get together, they 'talk shop' even more than do firearms enthusiasts! She also got to fly in a Stinson L5 liaison aircraft, designed for the purpose (rather than adapted from a civilian design, such as the Piper J-3 Cub becoming the Piper L-4 Grasshopper in military guise, or the Taylorcraft BL12-65 being transformed into the Taylorcraft L-2 Grasshopper). With a 6-cylinder engine, the Stinson L-5 was rather more powerful than the other liaison aircraft at the airfield. Miss D. commented she could feel the difference, and would treat it with respect as a pilot. 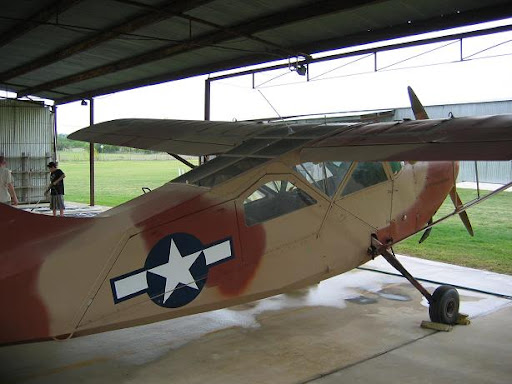 We'll be going out there again tomorrow morning, to attend the ALS Open Day. If any of my readers are in the San Antonio area, you can find details of the open day here. Come on out and join us - it promises to be a lot of fun! I saw one gentleman making up flour bombs for the bombing competition, and another informed me that no-one's ever actually hit the target! Last year someone was pretty good, but was allegedly disqualified because he deliberately bombed the control tower. Sounds like a good time was had by all concerned! 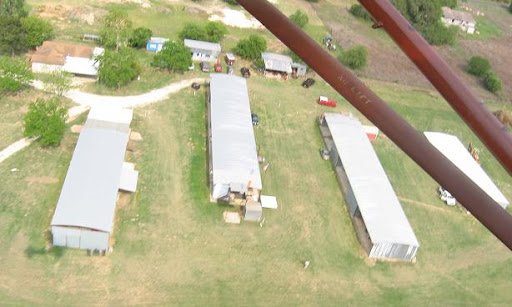 The ALS HQ, Cannon Field, snapped by Miss D. from the Stinson L-5.
Yours truly may be seen at the bottom of the picture, standing below the hangars.

I'll try to post more later tonight or tomorrow morning. Right now, I have to take Miss D. out to supper. Given all the great restaurants around here, that should be no burden at all!

Hughes Rudd (one time CBS newsman) wrote an article in American Heritage Magazine about flying one of these as an artillery spotter in Europe in WWII. The most telling comment was the fact that the government spent more on the crate used to ship the plane then they did on the plane itself.

Propellors and piston engines, the way it should be :)

Glad ya'll enjoyed the day. We had fun meeting you. ;-)

I think that someone was pulling your leg about the aircraft in the first picture.

Described as "Piper L-3 Cub under repair", it ain't.

Cute bird and I'd love to fly one sometime, but it isn't a Piper or an L-3.

Good pics, and I hope y'all have a good time!

Looks like a grand occasion. I really wish we could have made it down there. Fingers crossed for next time. :)

Good catch! I'm afraid he was sorting through 200-odd pictures, mostly close-ups of parts, not in order, and my only "help" was mumbling sleepily over at him while trying not to pass out on my laptop's keyboard.