The Stalinist view of Moses???


I'm obliged to reader Stacy M. for sending me a link to The People's Cube (the successor Web site to 'Communists For Kerry'), described by Rush Limbaugh as 'the Stalinist version of The Onion'. They've put out a neo-Marxist analysis of Moses and the Exodus. Here's an extract.

Now that the idea of social awareness and class struggle has reached American pulpits, it was only a matter of time before progressive historical revisionism left its academic confines and flooded the nation's churches, raising consciousness of the worshiping masses and prompting them to re-evaluate archaic concepts of "faith," "freedom," and "morality." Armed with the winning theory of class struggle, more and more oppressed churchgoers are finding the courage to speak out against violations of human rights in the ancient world, and indeed against the entire litany of "traditional" "conceptions" based on the "Bible" and its "teachings."

In this sense, the conference of religious leaders and scholars from around the world, titled "From Security to Homelessness: Moses and the Renegade Exodus of the Hebrews" was the first major event of its kind, focusing on Moses' fraudulent activities and the resulting major humanitarian disaster called the Exodus. 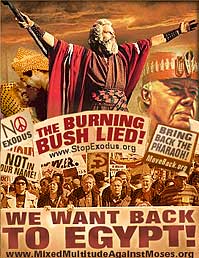 Convened at the Cathedral of the Victim Trinity in Chicago just before the Easter and Passover holidays, the confab manifested itself as a global showcase of progressive religious studies.

The tone of the event was set by keynote speaker Rev. Jeremiah Right-On, head preacher at the Cathedral of the Victim Trinity.

"Not everyone went along with that reactionary criminal Moses," declared Right-On. "The opposition, defamed as the so-called mixed multitude, was in the majority - and they didn't want to leave Egypt. The authors of the Bible obfuscated the socio-economic context, hoping to prevent us from knowing the truth. But the truth is that years of protesting, representing, and organizing had resulted in a progressive Pharaoh ascending the throne.

"The Pharaoh gave the people free health care, guaranteed employment, and complete economic equality, allowing women to do men's work for the same minimum wage. Even mass burials were paid for by the state. OK, he took away the straw they needed to make the bricks, but that was because some folks accidentally poked their eyes out with it.

"It filled the people with the audacity of hope. All people - Egyptians and Hebrews alike - toiled happily for the Common Good. It didn't occur to them to question the government's wise guidance and central planning, as they knew their production quotas were needed to build a better future in a fair and equitable monarchy. But the balanced and peaceful unity among the people and the state came to a halt when Moses initiated a campaign of criminal sedition and resurrected the failed notions of 'reason,' 'personal liberties,' and 'keeping what you earn.' 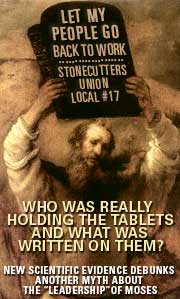 the guaranteed employment and flee into the desert. What followed next was a sad period in history marked by plagues, famines, and violence. It happens every time people foolishly trade the safety net provided to them by the government, for a questionable future of parting seas, airborne manna, and burning bushes. Especially burning bushes. We all know what happened! When the burning bush lied, people died!" The Rev. Right-On's remark was greeted with a standing ovation.

Other speakers focused in more detail on the right-wing religious brainwashing employed by Moses to control the people's minds. Sir Jeffrey Rankbottom, a special envoy sent by the Archbishop of Canterbury, pointed out the evil nature of the evangelicals, especially the southern variety. "Moses and his preachers actively circulated the ultra-conservative Ten Commandments, which they dreamed up in order to destroy the working Hebrew communities in Egypt," said Rankbottom. "The cunning idea that morality is somehow 'carved in stone,' and that one must bear personal responsibility for one's actions, was an insidious ploy to alienate the people from their Pharaoh. Unfortunately the ploy succeeded, turning the people into ingrates who abandoned their caring state that gave each according to their need regardless of race, gender, sexual orientation, or number of children sacrificed at the festivals."

The Tabernacle was another institution debunked at the conference. According to research conducted by Rev. Al Sharkton of New York, the biblical story about people dying from snake bites was a bald-faced lie. "All those people really died from second-hand smoke inhaled from the altar of the Tabernacle," Sharkton told the audience. "When the sons of Aaron, Nadab and Abihu, tried to protest and install filters on the altar, Moses had them rammed through with pikes. That story about fire coming down from heaven and consuming them was part of the big cover-up."

There's much more at the link, including a hilarious send-up of the Crossing of the Red Sea as a monstrous ecological crime against nature. Great stuff!

Labels: Faith and life, Funny, Other blogs
Email ThisBlogThis!Share to TwitterShare to FacebookShare to Pinterest

It sounds like the work of Discordians. Funny stuff!