A US man has been arrested and charged with drink driving after he crashed a motorised bar stool.

The 28-year-old man invented and created the bar stool which he says can reach speeds of 38mph, reports the Newark Advocate. 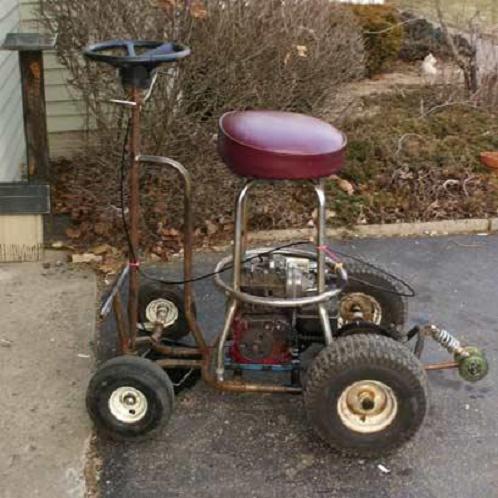 Police reports said he rolled the Frankenstein-esque lawnmower and bar stool combination on his way home from the pub in Newark, Ohio.

The man claimed the bar stool could reach speeds of 38 mph on its five-horsepower engine but that he was travelling at about 20 mph when he crashed it.

He allegedly admitted to drinking about 15 beers when interviewed by police at hospital but insisted that was after the accident.

“I was riding bar stool and I wrecked. I wasn’t drinking when I wrecked, I drank afterward because my head hurt," he told WCLT Radio.

Uh-huh. And the 15 beers just happened to jump into the ambulance from the side of the road, right?

Redneck Ambulance is at your Service, sir!

Still, you have to give the fellow full marks for creativity, and the thing even comes with a wheelie caster to make falling off the rear more difficult, as long as you can hold on to the steering wheel. It should probably have one on the front, too, in cast you should need to stop or something. Add surfaces left and right of the steering wheel to place your drink and ash tray, and you're ready for Burning Man.

It was Sumdood's special beer - one 12 oz serving has the same effects as drinking a case of standard beer, and the formula is designed so that intoxication occurs after the accident. Or so AD's blog said a while back.