No, that's not going to work!


I'm amused at a report from China of a puppy-raising cat.

A cat in China has adopted two orphaned puppies - and is trying to teach them how to catch mice.

The female cat - named Tom - nurses the puppies and washes them with her tongue, reports the Yaxin Network.

Owner Ms Shen, who lives in Urumchi, said the puppies' natural mother, Mao Mao, died delivering them a month ago.

She hoped that Tom might take care of the puppies as she had just given birth to three kittens and had been close friends with Mao Mao.

"We didn't dare put the puppies in Tom's basket at first, but just outside of it. Unexpectedly the puppies crawled over to Tom and started to fight for breast milk with the kittens," Ms Shen said.

She said Tom was treating her adopted children very well, even feeding them first, before the kittens. 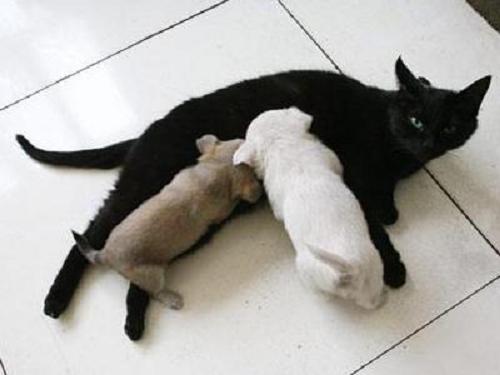 And, each day, Tom was trying to show the puppies how to catch mice, including how to jump onto the sofa and hide in a corner before pouncing on them.

However, the two puppies lacked the cat's agility and generally failed to jump on to the sofa and just bit and scratched the cover instead.

I can almost hear their thoughts . . .

Cat: Damn, these are the clumsiest, chewingest kittens I've ever seen!

Puppies: Damn, this is the squirreliest dog we've ever seen! And what's with eating mice???

Mom: No, you not can haz bone. Haz no meat. Find nice juicy mouse. You can haz that.