I'm amazed at a report of a vault manager at a New York jeweler, who apparently stole 513 pounds of gold from her employer over a five-year period. 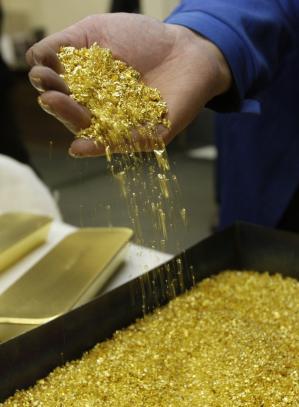 Authorities said Wednesday that Teresa Tambunting, 50, of Scarsdale, N.Y., a longtime employee of Jacmel Jewelry, brought a suitcase filled with 66 pounds of gold worth an estimated $868,000 back into the company's office after an investigation was launched in January, The New York Times reported. Authorities allegedly found another 447 pounds of stolen gold at the vault manager's home in February, the newspaper said.

District Attorney Richard A. Brown said in the statement ... "It is alleged that this once-trusted employee carried out her long-term scheme by concealing jewelry and raw gold in the lining of her pocketbook."


At the time of writing, gold is listed at US $866 per troy ounce. There are 14.58334 troy ounces to one pound avoirdupois, so a pound of gold would be worth just over US $12,629. The 513 pounds of gold she's alleged to have stolen thus come to a total of almost 6.5 million dollars! That's not a bad return on so long-term a plot, walking out each day with a few small pieces of gold concealed on her person.

One wonders what she planned to do with it. She certainly doesn't seem to have converted any to cash and used it.

Labels: Crime, The Mind Boggles
Email ThisBlogThis!Share to TwitterShare to FacebookShare to Pinterest

I wonder if she'd have been caught if she had been satisfied with a million or two...

It reminds me of some merchants during the gold rush who would "spill" gold while measuring it for payment of goods/services. Bartenders were notorious about lifting gold from their less-than -sober patrons.

Possibly she was planning to settle somewhere outside the U.S., come the day when she retired?

I can certainly see a suitcase full of gold coming in handy, to help pay for everything during one's "golden" years!