Today's Doofus Award goes to a burglar in Wales, UK, who clearly can't pick safe targets for his nefarious purposes!

Gwyneth Davies, from Treharris, near Merthyr Tydfil, South Wales, was getting ready for bed when she heard a crash from the kitchen and went to investigate.

She opened the door and found herself face-to-face with the man, who had broken in through the back door.

"I wasn't going to have this - I thought I'd do something about it," she said.

"He played right into my hands, so I let him have it.

"I said 'I've got you, lad. You get out from here, I've got a walking stick.' Up goes my walking stick and I hit him across the back four times. If I had broken it I wouldn't have cared.

"I told him, 'You sit on that stool over there. I'm calling the police. Don't move or you'll have my stick across you.'"

The pensioner said the man then buried his face in his hands and pretended to cry as she made him sit on a stool and stood guard over him until the police arrived.

"When the police came they were killing themselves laughing," she continued.

"My niece arrived and said I looked like a schoolteacher with a naughty child." 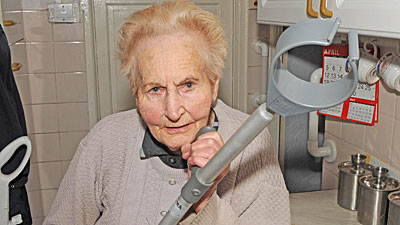 The BBC reports that Mrs. Davies was well prepared to look after herself.

Mrs Davies ... who has recently recovered from broken ribs, a fractured hip and double pneumonia ... was widowed 20 years ago, worked at London's Woolwich arsenal during World War II, handling landmines, fuses and detonators.

After the war she transferred to a munitions factory in Bridgend, before becoming a care assistant in a residential home.

But she said an upbringing with six brothers gave her the strength and courage to tackle the intruder.

She said: "I'm not frightened of anything really - I always been able to take care of myself.

"I was brought up with six brothers and put on the boxing gloves to spar with them. And I played darts and football."

I wonder how that burglar will explain his capture to his fellow inmates in prison? Worse still, how will he explain the fact that every cop and warder in the place is laughing at him?

I am sooo putting this into a DragonEye, PI story!

And now, as Paul Harvey might have said, was there a "rest of the story"? Did the police arrest Mrs. Davies for having the nerve to defend herself? Didn't she know that the poor burglar was just a misunderstood youth who needed a kind word and not a caning?

Mrs. Davies reminds me of my late grandmother. A great woman - from a very early age I wanted to be just like her.

And... if she's much like grandma Sophie - I feel sorry for any police officer who dares to challenge her!