Yesterday I wrote about how Wisconsin public sector unions had basically been fleecing the taxpayers of that state for heaven knows how long, until their influence was reined in earlier this year. I was doing some research around that topic, and ran into this article at National Review Online.

To learn everything you ever wanted to know about public-sector unionism, its history, and its impact on the labor market, just read this great paper by my colleague Eileen Norcross, “Public Sector Unionism: A Review”. She does a really good job of explaining the fundamental differences between private- and public-sector unions.

To be sure, both kinds of unions operate as a labor cartel, but their effects on the labor market are quite different. In the private sector, unions are able to secure wages for their members that are often higher than the competitive market wage, but that in turn reduces the demand for labor: “While private sector unions are able to increase wages for their members, these gains come with an economic tradeoff: fewer jobs for nonunion employees, lower corporate profits, and higher prices for consumers.”

There's more at the link. The study referenced by the author may be found here (link is to an Adobe Acrobat document in .PDF format). It makes very interesting reading.

Another article in National Review Online shows clearly why the Democratic Party is so dominated by unions, and slavishly toes their line at every opportunity, no matter what the cost to other interests.

Professor Anthony Davies at Duquesne University made a series of charts about political giving. Here is a very interesting one: 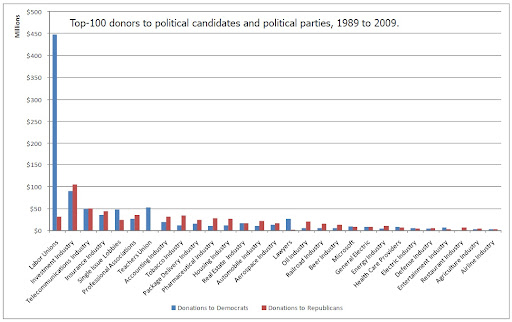 It breaks down the top 100 donors to political candidates and parties from 1989 to 2009. As we can see see, labor unions are the biggest donors by far. During that period, they gave almost $500 million to political parties or candidates (the second biggest donor is the investment industry with a little less than $200 million). Also, most of unions’ donations go to the Democratic party or Democratic candidates.

Again, more at the link. Professor Davies' charts may be found here (link is to an Adobe Acrobat document in .PDF format). The information they contain is hardly new, but it's presented in such a way as to highlight its impact on the US political process. That's eye-opening indeed! It certainly illustrates why President Obama was prepared to trash the legal rights of other stakeholders in order to protect his union buddies in the GM and Chysler bailouts . . .