The Daily Mail has published an article with some spectacular photographs of Beluga whales in the Arctic Ocean.

The whale sanctuary was designed and built by marine biologists from St Petersburg University.

Occasionally, guests at the local Arctic Circle Dive Centre can swim with the friendly giants, and get close enough to touch.

Arctic diver and photographer, Franco Banfi, 58, who captured these shots said: 'When a whale comes up to us and swims by, it looks you right in the eyes. Obviously we don't know what they think, but they are very curious creatures. 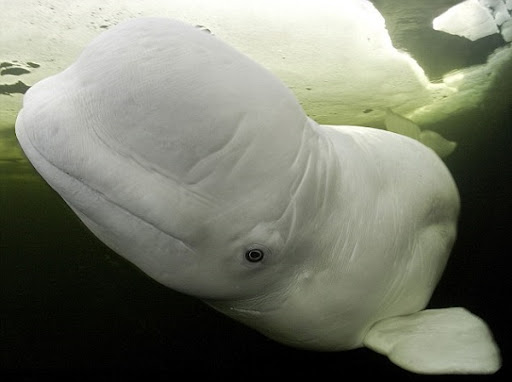 Before each dive the team have to create holes in the three-foot-deep ice using a hand saw, just to get through to the sea below.

Once they're in they have to swim around in heavy layers of clothes to keep alive in the -10C waters.

And it's definitely a case of choosing the short straw for one volunteer who gets to stay above ground in -30C winds, making sure the ice hole doesn't freeze over and trap the group.

'Photographing a story in very cold water can turn into a logistical nightmare,' admits Franco.

'But, if we are well trained, the underwater part of things is not really as harsh as you might think.'

'When we come out on land, temperatures can get down to -10C or -20C and things will instantly freeze, so we can barely move.

'Cold itself will not hurt the equipment, but it may slow down some of its functions as well as our own.'

Beautiful pics and an anathema to the econazis who want to proclaim all the whales are dying... :-)