I was pleased to see that part of the ashes of Mohandas Karamchand Gandhi, known as 'Mahatma' or 'Great Soul', were scattered yesterday in the harbor of Durban, South Africa. USA Today reports:

Six decades after his death Saturday, some of Mohandas K. Gandhi's ashes were scattered off the coast of South Africa, where he was confronted by racial discrimination during a 21-year sojourn and developed some of his philosophies of peaceful resistance.

An early morning service in a harbor in the eastern city of Durban on the 62nd anniversary of Gandhi's death included the laying of flowers and candles on the water's surface. 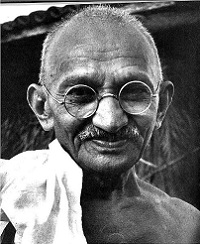 Gandhi, known as the Mahatma or "great soul," was shot dead by a Hindu hard-liner in 1948 in New Delhi. His ashes were divided, stored in steel urns and sent across India and beyond for memorial services. It was not unusual for some of the ashes to have been preserved instead of scattered as intended.

Gandhi first came to South Africa to work as a lawyer in the Indian community.

Soon after his arrival in South Africa in 1893, Gandhi, was thrown off a train for refusing to leave the "whites only" compartment. As a result, he threw himself into the fight for human rights in South Africa.

Gandhi lived in homes and farms across South Africa for two decades, before returning to India at the age of 46 to help fight for independence from Britain.

A large number of South Africans are descended from indentured workers brought from India in the 19th century to work on sugar plantations in the Durban area.

Many people aren't aware of Gandhi's twenty years in South Africa, and his fight there for better treatment for Indians. Today, Indians in South Africa remember him as one of their own, a national hero.

Gandhi organized an Indian corps of stretcher-bearers during the Second Boer War, some 1,400 strong. They saw service in some of the bloodiest battles of that war, including Spioen Kop, Colenso and the siege of Ladysmith. Gandhi (pictured here in his uniform) received the War Medal for his own service during that conflict.

(As an interesting footnote to history, Gandhi served at Spioen Kop, where Winston Churchill also saw action as a Lieutenant in the South African Light Horse [in which unit he'd been commissioned by General Buller after his escape from captivity as a correspondent for the Morning Post]. The two men would later become adversaries over Gandhi's opposition to British rule in India.)

After the end of the war, Gandhi continued to press for better conditions for Indians in South Africa. He became a 'thorn in the flesh' to the colonial government, and tried to press for improved status for Indians when the Union of South Africa was formed out of the British colonies of the Cape and Natal, and the former Boer republics of the Transvaal and Orange Free State, in 1910. Exasperated, the new Union government largely ignored or rejected his proposals.

When he finally left South Africa to return to India in 1914, the Minister of the Interior, Mines and Defense, Jan Smuts (later to become Prime Minister of South Africa, and serve as a Field Marshal and a close ally of Britain during the Second World War), wrote to a friend: "The saint has left our shores, I hope, forever." One wonders what Smuts would have made of the scattering of Gandhi's ashes at Durban this weekend?

Interesting that the article mentioned Ladysmith. I had a Great Uncle who fought there as part of a Naval Artillery contingent. I don't remember much about him other than he survived the war and later settled somewhere in South Africa.

Just a part of family lore.

I, too, had a relative who served in the Boer War. I have a pocket flask of his.

I worked as an exploration geophysicist in S. Africa briefly in the '80s. At the time I was technically classified as "coloured" and would not have been allowed into the country had I told them that.