The Daily Mail reports on an event in South Korea where an estimated one million ice-fishing enthusiasts are expected to descend on a local river.

Visitors to Hwacheon in South Korea have arrived for the annual Ice Festival, which saw 200,000 people visit over the weekend, and which organisers anticipate will see more than a million taking part by the end of the three-week event.

During the festival, anglers drill holes in the ice, which is around 16inches (40cm) thick, and attempt to catch mountain trout with their rods.

Or they can even try the tricky art of catching them with their bare hands from a large tank at the festival's Ice Plaza.

Visitors can then cook their catch at cooking centres around the site to have it raw or grilled. 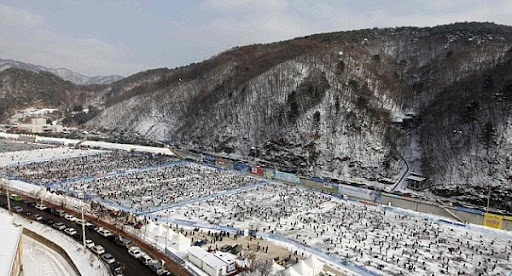 Around 9,000 holes have been ready drilled in the ice, with around two metres of clean water beneath them and 32 tons of fresh trout are added to the river every day.

The festival, which closes on January 27, also features activities such as ice and snow sledding, snow sculpture and ice football.

There's more at the link, including some very entertaining photographs.

Personally, I'd be asking why I should freeze my butt off on the ice when, with a little careful skullduggery, I can simply snag some of those 32 tons of trout they're releasing into the river each day! Hmm . . . perhaps a net beneath the truck as they pour them out?

Look, if I want an excuse to drink beer, I'll use "Friday," not "I'm sitting on a lake getting a hook wet."