Clothes as a wearable battery?


Researchers at Stanford University have developed clothing dyed with carbon nanotubes that can store electricity. The BBC reports:

Yi Cui and his team at Stanford University in the US has shown that their "ink" made of carbon nanotubes - cylinders of carbon just billionths of a metre across - can serve as a dye that can simply and cheaply turn a t-shirt into an "e-shirt". 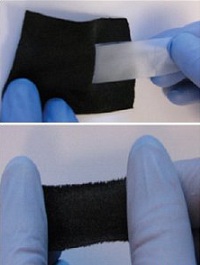 The idea is the same as that outlined in their work with plain paper; the interwoven fibres of fabrics, like those of paper, are particularly suited to absorbing the nanotube ink, maintaining an electrical connection across the whole area of a garment.

Cloth is simply dipped into a batch of nanotube dye, and is then pressed, to thin and even out the coating.

The fabric maintains its properties even as it is stretched or folded. Even rinsing the samples in water and wringing them out does not change their electronic properties.

The next step is to integrate the approach with materials that store more energy, in order to create more useful batteries. By combining the approach with other electronic materials in the ink, the team believes even wearable solar cells are possible.

There's more at the link. The full report of the Stanford researchers is available here.

This is very promising, particularly when seen in the light of wearable electrical generating devices. It's already been demonstrated that generators can be mounted in footwear, so that as one walks, one generates electricity. (One potential approach is described here.) If that could be used to charge one's clothing, particularly when allied with interwoven solar cells in the fabric as described in the BBC article, one could have an almost perpetual source of low-intensity power to run small appliances like cellphones, music players or GPS navigation aids.

I imagine the military will be looking at this technology with great interest, given the number of electronic devices that soldiers must carry around the battlefield today. If they could charge their own uniforms with enough power to obviate the need for extra batteries, that'd be an enormous weight saving, not to mention taking a massive strain off the supply chain. Simpler logistics is hugely desirable.

I read a SciFi book a while back that had a future pilot wearing a flight suit that had a computer and sensors built into the fabric of the suit. It seems like this is a step closer to that.

What happens when those teeensy little fibers get in the lungs? Seriously? Sounds like a carcinoma waiting to happen. Unnaturally small junk like this doesn't occur in nature and our lungs aren't built with the ability to evict such particles.

That's the reason asbestos causes lung cancer as killed my dad: it gets in there, can't come out, forms an irritation pocket, in response we surround it with cells, cells on the inside don't get enough support and mutate, bingo you got cancer.

Asbestos is not otherwise the least bit toxic.

This sounds like a recipe for the same thing and it could be years before we know for sure.