The BBC reports that the Arctic Tern has been shown to have a truly astonishing migration pattern. (All photographs courtesy of Carsten Egevang/ARC-PIC.COM via the Arctic Tern Project Web site.)

The Arctic tern's extraordinary pole-to-pole migration has been detailed by an international team of scientists. 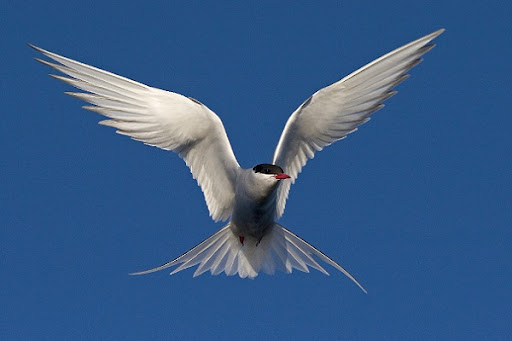 The researchers fitted the birds with tiny tracking devices to see precisely which routes the animals took on their 70,000km (43,000 miles) round trip.

The study reveals they fly down either the African or Brazilian coasts but then return in an "S"-shaped path up the middle of the Atlantic Ocean.

The long-distance adventure is described in the US journal PNAS.

"From ringing, we knew where the Arctic tern travelled," said Carsten Egevang of the Greenland Institute of Natural Resources.

"The new thing is that we've now been able to track the bird during a full year of migration, all the way from the breeding grounds to the wintering grounds and back again."

Starting in August and September, this small bird - which weighs little more than 100g (3.5oz) - will head away from Greenland with the intention of getting to the Weddell Sea, on the shores of Antarctica.

It will spend about four or five months in the deep south before heading back to the far north, arriving home in May or June. 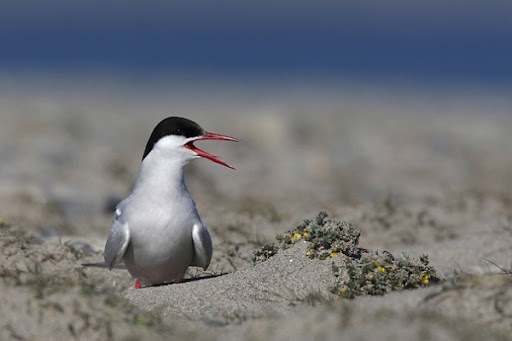 A team from Greenland, Denmark, the US, the UK and Iceland attached small (1.4g/0.05oz) "geolocators" to the animals to find out exactly where they went on this polar round trip.

The devices record light intensity. This gives an estimate of the local day length, and the times of sunrise and sunset; and from this information it is possible to work out a geographical position of the birds.

The geolocators were provided by the British Antarctic Survey (BAS).

"The use of these devices on seabirds is not only revolutionising our understanding of migration patterns, but the resulting data on distribution also help address the requirement to identify important biological hotspots," said Richard Phillips from BAS, a co-author of the PNAS paper.

The first surprise is that the terns do not make straight for the Antarctic when they leave the Arctic, but make a lengthy stop-over in the middle of the North Atlantic, about 1,000km (620 miles) north of the Azores.

Here, they feed on zooplankton and fish to fuel themselves for the long journey ahead.

"We were able to compare biological productivity in the ocean from satellite imagery and we could see a high productive area that the birds will spend time in," said Mr Egevang.

"Even more importantly, it's the last high productive area before they enter tropical waters where we know productivity is low."

The birds then head south along the coast of western Europe and western Africa before making a choice, either to continue hugging Africa or sweep across the Atlantic from the Cape Verde Islands to continue the journey along the Brazilian coast.

About half the birds that were tracked decided to take the South American path. It is not clear why, but the researchers believe wind might make either route seem favourable to the terns. 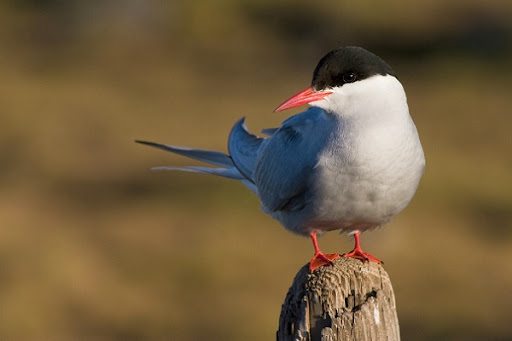 After spending their northern winter months in Antarctic waters, the terns then fly back towards the Arctic.

But rather than retracing their southward flight paths, the birds follow a gigantic "S" pattern up the middle of the Atlantic Ocean.

"They make a detour of several thousand km but once we start comparing the route to the prevailing wind system, it makes perfect sense - moving in a counter-clockwise direction in the Southern Hemisphere, and clockwise in the Northern Hemisphere.

"It's just more energy-efficient for them to do that even though they are travelling several thousand more km than if they flew in a straight line."

There's more at the link: also a lot more detail at the Arctic Tern Project, where the full scientific report may also be found (link is to a .PDF file).

It amazes me that such a tiny creature can fly so far - and not just once, but for year after year. As the Arctic Tern Project points out:

The annual roundtrip of the Arctic tern is approximately 71,000 kilometers [over 44,000 miles]. As Arctic terns can live for over 30 years, the total distance flown in a tern's lifetime may exceed 2.4 million kilometers [almost 1.5 million miles]. That's equivalent to around 3 return journeys to the Moon! Not bad for a bird with a mass of a little over 100 grams [3.5 ounces].

I 'believe' the winds DO play a major part in their migration pattern...