A riot with a difference


One's used to seeing video or pictures of police using water-cannon to break up riots and demonstrations. However, what happens when the demonstrators have water-cannon of their own - and foam to fire through them?

When a disgruntled group of Belgian firefighters wanted to press for speedier promotions, an ordinary street demonstration just wouldn't cut it.

Instead, the 150-strong group turned to their trusty water trucks to make themselves seen - blocking the streets of the capital Brussels with a spectacular foam display.

Making use of the hoses usually reserved for fires, the emergency workers sprayed foam from 20 trucks over a main road in central Brussels, blocking traffic in the busy area. 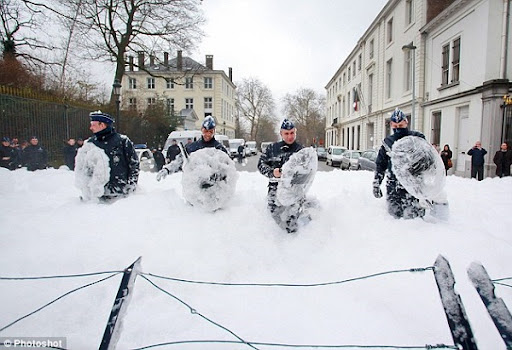 The streets resembled a winter wonderland as the thick layer of white foam coated the road and nearby buildings.

Police who arrived to calm the protest were helpless as their comrades covered them in foam, and many officers were spotted laughing.

Not happy with just stopping traffic they then turned their hoses on nearby government buildings - including the Brussels' Minister President's office.

The protesters also used their ladders to get onto the roof of government buildings as sirens wailed below.

Looks like a good time was had by almost everyone, including the police!

Labels: Boys and their toys, Cleanup, Funny, Police
Email ThisBlogThis!Share to TwitterShare to FacebookShare to Pinterest

"Looks like a good time was had by almost everyone, including the police!" Except perhaps the commuters they blocked on this "busy street," and the taxpayers who paid for the foam. It was childish, pure and simple.