So much for rain in Southern California . . .


An expatriate British journalist living in Los Angeles, David Willis, is somewhat bemused by the reaction of the locals to the recent winter storms.

Remember that song It Never Rains In Southern California?

Ironically perhaps, it was written by an Englishman - Albert Hammond - who had yet to actually travel here when he came up with those words.

True - it is not actually about the weather, but it has probably done more than any other ditty to uphold the image of Los Angeles as some sort of palm-fringed paradise with nary a cloud in the sky which - compared to where Mr Hammond and I hail from - it is.

There are parts of the UK which get 15 times more rainfall in a typical year than Los Angeles.

Seattle, which is just up the coast from here, averages 37 inches (940mm) of rain. That is double the figure for the City of Angels.

Yet to hear the city's overly tanned weathermen working themselves up into a frenzy over the last few days, you could be forgiven for thinking we were on the brink of an apocalypse.

Struggling to contain themselves as they conjured up portentous satellite images of storm clouds preparing to wreak havoc, the warnings became increasingly dire.

Stay home and batten down the hatches.

Dig a hole or hide in the refrigerator.

Better still, round up two of every animal and build an ark.

And if you do have to go out, for goodness' sake take something with you to fend off those locusts and frogs.

The cause of all this excitement? Rain - rain which would bring with it hailstones the size of grapefruit and winds fierce enough to reconfigure a Beverly Hills facelift.

Up to six inches (150mm) were forecast in some places and, as well as thunder and lightning, God forbid that the temperature would fall below 60F (15C) - or, as it is known locally, the limit of human endurance.

To me, six inches of rain is really only a concern if you happen to be less than six inches tall. Otherwise there is a pretty good chance you will survive.

But it is a problem here not only because of what people are used to, but because of where they have chosen to live.

Wisdom has it there are indeed four seasons in Los Angeles - fires, floods, mudslides and earthquakes.

A bone-dry summer paves the way for so-called Santa Ana winds - malevolent gusts which carry with them a dry heat from the desert.

All it takes is a stray cigarette butt and California bursts into flames.

It does so every year - regular as clockwork - but, for reasons known best to themselves, that does not deter people from building in wooded canyons or on the edge of steep hillsides.

Those that survive fires fanned by the blow-torch winds have only to wait until the rain arrives and, before they know it, they are on their way to Mexico on the back of a sudden mudslide. 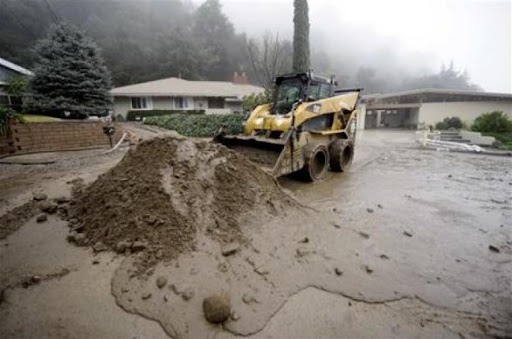 It comes down to the fact that people here simply do not understand rain the way British people do.

And why should they when they get so little of it?

It is little wonder that a city which sees 320 days of sunshine virtually grinds to a halt the moment the heavens open.

Drivers put on their headlights and slow to a crawl, tempers rise. Interrupting a perfectly blissful summer's day is one thing, but these clouds had the temerity to intrude on paradise.

I woke up the day after the "big one" - our fourth big storm in a week - and was relieved to find my house was on the same street it was on when I went to bed.

We had had some thunder and lightning overnight. There were even reports that a car had been picked up by a tornado and tossed around like a rag doll (as if things were not bad enough for the American auto industry). And I must say it was still raining cats and dogs whilst I was making breakfast.

But venturing out gingerly - while keeping an eye open for the four horsemen of the apocalypse - I have to say it proved about as treacherous as a typical day on Bournemouth seafront.

The weathermen's verdict was we "dodged a bullet" and, aside from some gripping live pictures of a fireman rescuing a bemused-looking border collie from a lake, TV stations had to content themselves with shots of swaying palm trees and the odd bicycle that had blown over, hardly the stuff of newsgathering legend.

The good news was that the rain had scrubbed the sky of smog and left my newly re-seeded lawn glowing a lush green.

I could not resist a peak at the forecast and almost squealed in delight when I read it: cloudy skies giving way to another storm system moving in off the coast.

As far as I am concerned, it cannot come soon enough, not least because it reminds me of home and why I came to live here in the first place.

Having visited Los Angeles on several occasions (once for a stay of almost a month), I have to agree with Mr. Willis: the locals haven't the faintest idea of how to handle rain! To drive on LA freeways during or immediately after a rain shower is to take one's life in one's hands . . .

In defense of the LA drivers in the rain, when you don't have frequent rain, it allows the oil/rubber/exhaust slick to build up on the pavement that much thicker. The first bit of rain floats that slick up and roads get scary-slippery.

Of course, after a quarter-inch of rain, then it's just bad driving.

As to six inches not being a concern, it is when the soil can't absorb it and drainage is done through concrete ditches. I did rough math the other night driving home and figured that an inch of rain equates to about 50,000 gallons of water per acre. Not exactly a tiny trickle there.

As a voluntary refugee from The Valley of the Smokes in The Land of the Shaking Earth (as the Indians called it before the arrival of the white man) I can attest to driving ANYTIME in Los Angeles is to take one's life in one's hands.

Mr. Willis is invited to leave Los Angeles and he can shove his snark before he takes it with him.

And, there are other places for you to visit as well, Mr. Renaissance Man...

Anyhoo...I once had to drive a loaded 25ft. UHaul truck through L.A. during a downpour (coincidentally, in January). It took nearly 4 hours to drive a distance that should have only taken an hour.

I live in L.A. (can't get out yet...) and it's all true. Any rain at all brings lightning-bolt graphics as a logo for "Storm Watch" coverage. Some drive like it's bone-dry, and cause accidents. Others drive like it's ice instead of water, and cause accidents. Both types cost a lot of time for normal drivers. Complicating the whole things is that L.A. never constructed a proper drainage system. There are entire blocks with no storm drains, so the drains there are can't cope with a heavy rain lasting more than a minute.

Me, I love the rain. I go for long walks (suitably attired, of course, and with an umbrella) and I don't let it slow me down, but it's really an experience out here.

Cap'n chumbucket got it right. My daughters live in L.A., and we've been down there at least once a year for the last twelve. Driving in L.A. at any time is an adventure, at best.