And bubbles to you too!


I'm informed that the last Monday in January each year has been officially designated as 'Bubble Wrap Appreciation Day'. This week's celebration also marked the 50th anniversary of the invention of bubble wrap, making it particularly noteworthy. The invention of the stuff is described as follows:

The story begins in a building no bigger than a garage in Hawthorne, NJ with two engineers, Marc Chavannes and Al Fielding. Marc and Al were trying to make a plastic wallpaper with a paper backing. Surprisingly, this product didn't take off. They quickly realized, however, that their invention could be used as a cushioning material for packaging. At that time, only abrasive paper products were used for packaging, which did not suffice for cushioning heavy or delicate items. They founded Sealed Air Corporation in 1960, and today, Sealed Air is a leading global manufacturer of a wide range of food and protective packaging materials and systems with annual revenues in excess of four billion dollars.

Quite apart from the millions of linear feet of the stuff sold annually, it's alleged that there are over 250 Facebook pages devoted to it. The original manufacturers of bubble wrap, Sealed Air, have even set up a special Web page devoted to having fun with it.

In a particularly fortuitous piece of timing, the insurance Web site Confused.com set about generating publicity about safety and accident prevention in Britain's most accident-prone street. They used - what else? - bubble wrap to make their point. The Daily Mail reports:

The most accident-prone street in Britain has been given the ultimate safety blanket - 1,500 sq metres of bubble wrap.

Cars, gates, bins, lamp posts and even garden gnomes were wrapped in the cushioning film to highlight the dangers of driving in winter. 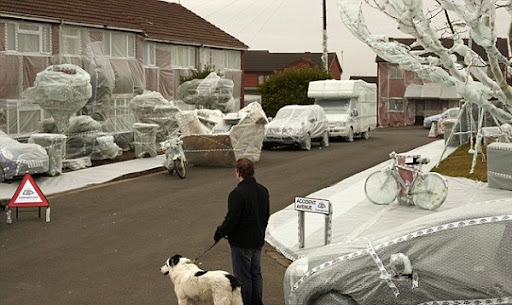 According to a car insurance comparison website, homes in Somerville Road, Worcester, generate the highest number of accident claims in the whole of the UK.

The street , which has been dubbed 'Accident Avenue', has had around ten claims a year for ten years, which for a small street, made residents the most accident-prone drivers in the country.

The stunt was set up by Confused.com and took eight men more than 12 hours to complete.

One Somerville Road resident, who did not wish to be named, said it was a shock to see all the houses wrapped up.

He said: 'I live just up from the houses that were wrapped up so the sight of them all covered up took me a bit by surprise.

'They have wrapped absolutely everything in plastic - it looks very striking.

'I think it is a really amusing idea, although I don't know how long it will be until someone starts popping the bubbles.'

I'll confess that I've popped my fair share of bubbles in sheets of bubble wrap . . . including some that were pristine and unused, to the fury of those about to use them! I wonder whether the residents of Somerville Road have been kept awake by midnight bubble-poppers?