I was interested to read of the setting of a new US record for the largest wingsuit skydiving formation last December. The Daily Mail reports:

The record-breakers - who came from 16 different countries - jumped from four planes at 13,000 feet over Lake Elsinore, California.

President of the group behind the American record, Raise the Sky, Taya Weiss, 32, said that some onlookers had even mistaken them for a UFO.

She said: 'The jump lasted for over a minute, with the whole formation travelling approximately two-and-a-half-miles across the ground. 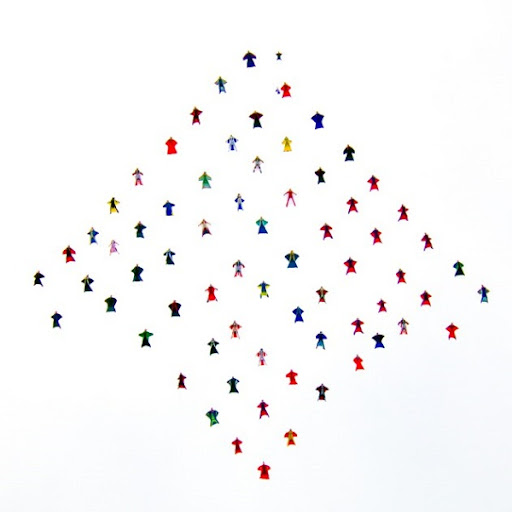 'After a full year of holding skills camps and smaller records all over the world, each jumper on this formation had to be qualified before being allowed to join the team.

'We did 15 jumps at this event, seven of which were using all four planes together, before achieving the record.

'The team had to be up and eating breakfast at the dropzone by 6am every morning for a dawn start. We practice the formation on the ground before we jump. It's a lot of hard work, but the results are beautiful and inspiring, and very worth it.'

The spectacular aerial images were shot by British cameraman Mark Harris, who wore a helmet-mounted camera while flying a wingsuit on his back underneath the group.

Brave Taya added: 'It is the standing US National Record for Largest Wingsuit Formation, certified by the United States Parachute Association.

'Wingsuit skydiving is still relatively new, so although a growing number of countries certify wingsuit records, we have not yet been recognised by the Federation Aeronautique International.

'If they give us the go-ahead, we can start setting official world records, including as many countries as possible.'

Raise the Sky is a not for profit organisation founded in 2009. It seeks to have every skydiving record associated with raising money and awareness for a good cause.

This wingsuit record raised $5000 for the charity City Year, which provides mentoring to keep underprivileged children in school.

'We drop out of planes to keep kids from dropping out of school,' said Taya.

There's more at the link, including some very good photographs.

Intrigued by the article, I did an Internet search for more information. I found this video on YouTube, showing several of the record attempts (including the successful one). There's some remarkable photography here, and it's well worth watching.

Congratulations to all involved.

That is one of the most beautiful things I've ever seen.

From a bit of distance, they look like they're wearing wizards robes. Somehow the phrase "Change of management at Unseen University" pops into my mind.

Very cool, and beautiful photography to boot. However, given the choice I'd rather fly the plane than fall out of it.

WV- thinge as in what's that thinge they're wearing...